The media has discovered the impending Two Million License Armageddon. 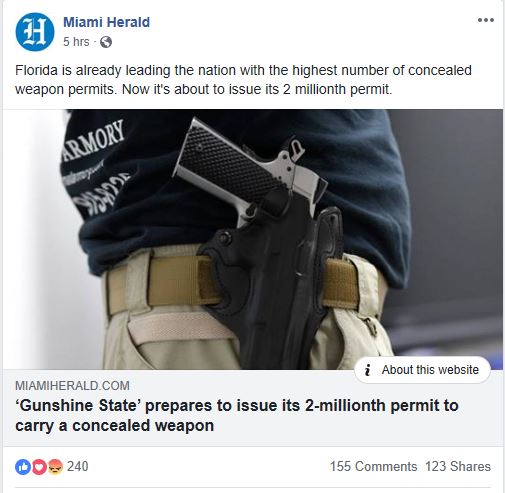 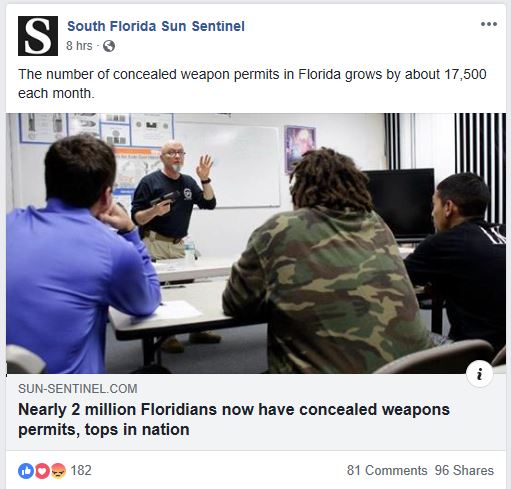 Although the overall violent crime rate nationally has been on a downward trend since the 1990s, Florida has been the site of at least seven mass shootings in the past three years.

And that has to do what exactly with concealed carry? Sure as hell Nikki Cruz did not have a CWP.

What struck me as interesting were the comments I saw in Facebook. I was expecting the usual flood of “ZOMG! We are gonna die!” and although present, a large majority were in favor and congratulatory of the incoming goalpost. In Twitter there were few replies but almost all favorable.

Contrary to the billions in News spent to say otherwise, Floridians like guns, like the Right to Keep and Bear Arms. We were told also that Floridians hate Stand Your Ground and study after study, poll after poll the results have also said we like our SYG law.

And yet, our State Gun Rights organizations have failed to capitalize on that sentiment. The lies and cover ups that came out the Parkland shooting are slowly oozing out and they are not helping our political enemies. Maybe next session we will be able to revert the laws passed on the paroxysm of “do something!” and bring some real sense into what needs to be done to reduce school crime.

We will end the legislative session in three more weeks and hopefully the avalanche of Gun Control bills will remain in desk drawer hell.