Igor is a fascist the like rest of the woke Left

I read Miguel’s post The scariest thing for a White Liberal is ….

The two Tweets that he posted was just part of Igor Volsky’s thread.

He said some other things in his Twitter rant that I wanted to address. 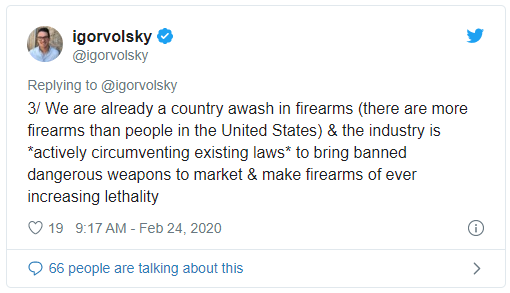 There are many parts to this that are wrong.

There are more guns in America now than ever before.  So what.  In most of America, violent crime is down.  It’s near an all-time low at the national level.  The problem is that in a handful of very large, high population density, cities, crime is up, New York, Los Angeles, Chicago, DC, etc.  Those cities, because of their size and influence, are cultural centers of our national conscience, so the perception is that crime is up.  It’s only up in those Blue bubbles, and because of disastrous soft on crime policies.  More guns does not mean more crime, especially at the national level.

The statement that “the industry is *actively circumventing existing laws* to bring banned dangerous weapons to market” is wrong.  The firearms industry is one of the most heavily regulated industries in America.  There is an entire federal law enforcement agency that exists to police it, the ATF.  Every time something new comes out that might violate the law, firearms manufacturers have to get a letter of approval from the ATF to sell it.  The pistol brace, smooth bore firearms (Tac14, Shockwave), even the original bump stock, were all done within the letter of the law, signed off by the ATF.  They are not circumventing the law in any way.

To understand this, it needs to be understood that there were structural changes at the ATF starting in the early 2000’s.  I have this information from a very good, first-hand source.  Being a law enforcement only agency, there was a lot of questioning as to why the ATF existed.  Especially after it got such a bad name after the Waco, Texas disaster.  Why not just merge the ATF with the FBI and call it a day?

The ATF realized that it needed to be different.  They adopted a role more similar to the FAA or FDA, less law enforcement and more industry regulatory agency.  They also softened their stances on a lot of things, allowing AR pistol braces and other “innovative” adaptions.

The increasing popularity in NFA items is likewise the result of structural changes at the ATF.  NFA applications have become more shall issue, and the permitting time has gone down considerably (the Obama suppressor rush notwithstanding).

To say that these changes, which have not come with an increase in crime, is industry illegality or malfeasance is dishonest and slanderous.

The part “make firearms of ever-increasing lethality” is accurate, but disingenuous.  The purpose of a gun is to kill.  You want your hunting bullet to kill the animal as fast and painlessly as possible.  You want your defensive ammo to stop the threat as fast as possible.  A lot of engineering goes into making that happen.  the effectiveness of the tool is improved.  Igor may not like that, but a gun company making more lethal guns is like Ford making electric cars that have greater range and faster recharging times. 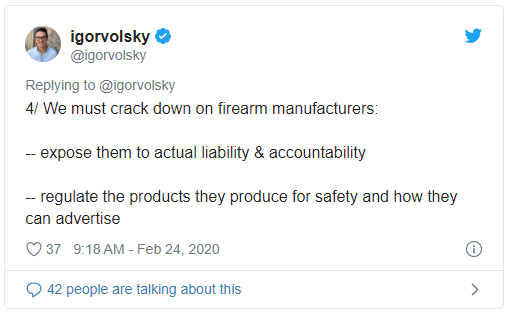 Again, the firearms industry is one of the most regulated industries in America.  It does benefit from some legal protection.  The Protection of Lawful Commerce in Arms Act exists to protect the industry from being held liable for consumer misuse.

It is not Glock’s fault if a gang member trades drugs for a stolen gun and uses it to kill a rival dealer.

The PLCAA does not protect gun makers for making products that are unsafe or defective.  This is why Remington chose to settle over the Walker trigger design.  It also doesn’t protect the gun industry if they did something illegal.  The PLCAA did not protect them from that.  This is also at the heart of the Bushmaster case, did Bushmaster’s marketing violate Connecticut advertisement laws.

Defective guns are a problem, which is why recalls occur.  Just ask SIG about the drop problems with the P320, or Rossi about… everything (just kidding Miguel).

What Igor wants is “guns kill, so they must be regulated to death or banned.”  The problem is, guns are supposed to kill.  That is the difference between guns and teddy bears or lawn darts. Nobody buys a teddy bear thinking it could kill a child.  Anybody responsible person who buys a gun knows it could kill a child so don’t let the child get ahold of the gun.

This regulate the product and hold makers accountable is disingenuous.

There is one more aspect to the PLCAA that is real but never gets mentioned: national security.  Gun companies cannot survive financially on military and law enforcement sales alone.  By the time the government has negotiated down the price, there is hardly any profit left.  Civilian sales are where the profit is.  SIG get the government to fund the R&D on some PDW, but the money is made in selling it as a braced pistol to the consumer.

Without the PLCAA, the anti-gun nuts could sue the industry out of existence.  That means no more gun companies, and engineers, manufacturing techs, and so on that know how to design and make them.  That means that the skills to design and make guns, which is a strategic necessity, would no longer exist and that would harm our national security.

Just look at England.  They have to get all their guns and gun design from outside England.  When they needed to update the SA80, they had to turn to H&K because the gun making skills in the UK were gone.

The Left hates the military, but the PLCAA is more than just fair to the industry, it is preserving a strategic interest.  The knowledge of how to design and make weapons for the military. 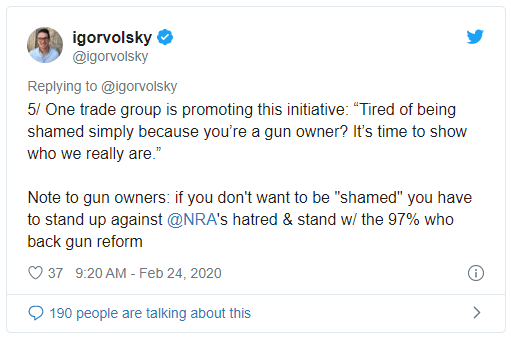 The woke Left has weaponized shame.  It is the core of cancel culture.  They will harass you and shame you and try to cost you your job and livelihood to get you to concede to their demands.

They want to employ this against gun owners to get them to concede to the lie about the 97% who want gun reform.

“Back our demand or we’ll call your boss and get you fired.  We’ll destroy your small business on Twitter, Facebook, Yelp, and Google Reviews so you’ll never make any money again.  We’ll make sure your children are bullied in school and Baristas recognize you and write insulting names on your coffee cups.  Do what we say or we will ruin your reputation and make you a pariah in society.”

This is the threat.  This is the ugliest of the mob mentality.  This is not winning with ideas, this is social terrorism.