Via No Lawyers, Only Guns and Money, we find out that Lonnie Phillips who sued Lucky Gunner and Cheaper than Dirt for selling ammunition and other stuff to the Aurora Killer, lost and is now forced to pay for the defendant’s costs,has been on the books, working for the Brady Campaign since January 2013 according to his Linkedin profile.

But something else called my attention: 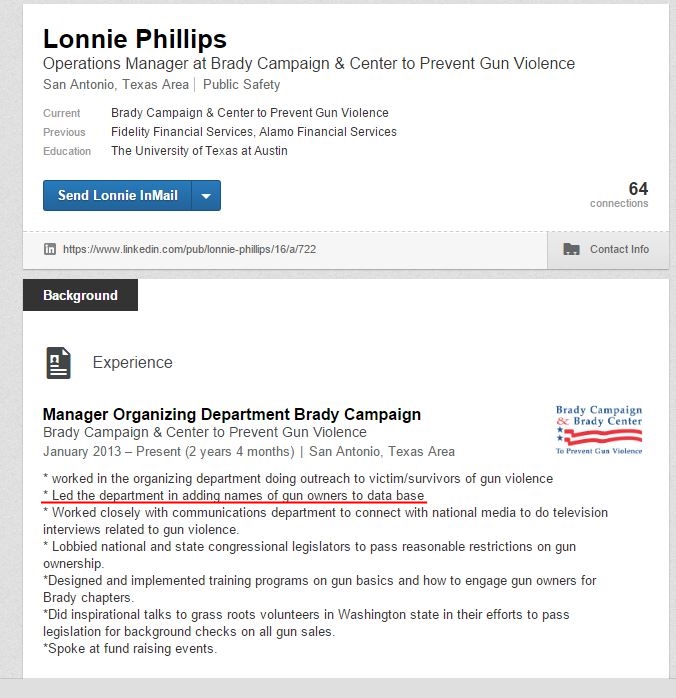 For those with bad eyesight:

So what the hell is the Brady Campaign doing keeping a database of firearm owners? Are they planning on doing some massive lawsuit against us? Are they keeping an enemy’s list?

And the other question it needs to be answered: Are they keeping a database of Florida Gun Owners? Because if they happen to be doing so, I have news for them:

PROHIBITIONS.—No state governmental agency or local government, special district, or other political subdivision or official, agent, or employee of such state or other governmental entity or any other person, public or private, shall knowingly and willfully keep or cause to be kept any list, record, or registry of privately owned firearms or any list, record, or registry of the owners of those firearms…..
…..Any person who, or entity that, violates a provision of this section commits a felony of the third degree, punishable as provided in s. 775.082 or s. 775.083.

If names of Florida Gun Owners are being kept in that database, The Brady Campaign and Mr. Phillips by his own admission are risking 5 years in prison and $5,000 in fines.

And again, they must answer the obvious question: Why are they keeping a database of Gun Owners?

11 thoughts on “Is the Brady Campaign breaking Florida Law?”