Let Me Be Clear

There are two quotes from George Orwell’s magnum opus, 1984, that have been sticking in my mind the last few days.

“There will be no curiosity, no enjoyment of the process of life. All competing pleasures will be destroyed. But always — do not forget this, Winston — always there will be the intoxication of power, constantly increasing and constantly growing subtler. Always, at every moment, there will be the thrill of victory, the sensation of trampling on an enemy who is helpless. If you want a picture of the future, imagine a boot stamping on a human face — forever.”

“The old civilizations claimed that they were founded on love or justice. Ours is founded upon hatred. In our world there will be no emotions except fear, rage, triumph, and self-abasement. Everything else we shall destroy — everything.”

When I read 1984 in high school, and then again in college, the idea of a free nation turning into a totalitarian state was treated as a top down movement.  Of course 1984 was based on the rise of Stalin in the Soviet Union, and that very much was a top down power grab.

It rocks me to my core to see so much of what Orwell warned us against coming to life, as a bottom up, populist movement.  I read 1984, firm in the conviction they I never wanted to have the boot in my face.  I am a die-hard supporter of the Second Amendment because our founding fathers wrote into the principle document of this nation, a way to get the boot out of our faces if all other means fail.

I watch the Social Justice activists, BLM agitators, and people at the anti-Trump rallies, and for all their bloviating about how they are oppressed and they want to end oppression, their goal is quite clear.  They want to wear Orwell’s proverbial boot.

The extent to which they want to carry out the act of becoming the oppressor class makes me wonder if either Orwell was perhaps the greatest prognosticator of the 20th century, or Social Justice has read 1984 as a how to manual.

“There will be no curiosity, no enjoyment of the process of life.”

There is a quote by H.L. Mencken “Puritanism: The haunting fear that someone, somewhere, may be happy.”  Social Justice activists have succeeded in taking this to the extreme, by finding any opportunity to denounce someone else’s fun as racist and shut it down.  They have used the term cultural appropriation as an excuse to stop all intellectual curiosity or cultural cross pollination.  These people have be able to find the racism and oppression in taco night, carnival games, cafeteria sushi, yoga, popular literature, weak reasons to go drinking, exploration of classical art, and pretty much everything else in the known universe.

“Ours is founded upon hatred. In our world there will be no emotions except fear, rage, triumph, and self-abasement. Everything else we shall destroy — everything”

Social Justice is a movement that states that it is for tolerance and anti-racism.  The level of open, naked, antisemitism it displays is something that Western Civilization has not seen since Europe in 1930’s.  Top colleges like Vassar, Oberlin, and the UC system all but offer degrees in Jew hatred.  Even people who would normally be embraced for being “stunning and brave” by Social Justice, find themselves under attack for being associated with Jews.

They have fought to change or ban the names of libraries, academic titles, school crests, and school names, with near ISIS desire to purge history that does not conform to their ideology.

They turn the most pedestrian of activities into an excuse to earnestly advocate for ethnic cleansing and genocide.

They use racial animus and hate to swell their ranks and demand undeserved restitution form others.  They do not try to better society.  I have never heard, seen, or read a discussion on White Privilege that sought to improve the lives of black Americans, only to make the lives of White Americans worse.  It is the politics of scapegoating all of a group’s ills on another, and then exacting retribution.

Social Justice is no stranger to shouting down people and opinions they disagree with.  But what they have done in this election season is beyond the pale.  I am no fan of Donald Trump (and I have no interest in the comments to this post turning into a defense of Trump), but I adamantly believe in the principle I may not agree with what you say, but I will defend to the death your right to say it.

Using riots, violence, and the promise of civil disobedience to try and shutdown the campaign of a politician is the antithesis of democracy.  Threatening people with violence for supporting a political candidate is the fastest way to end liberty. 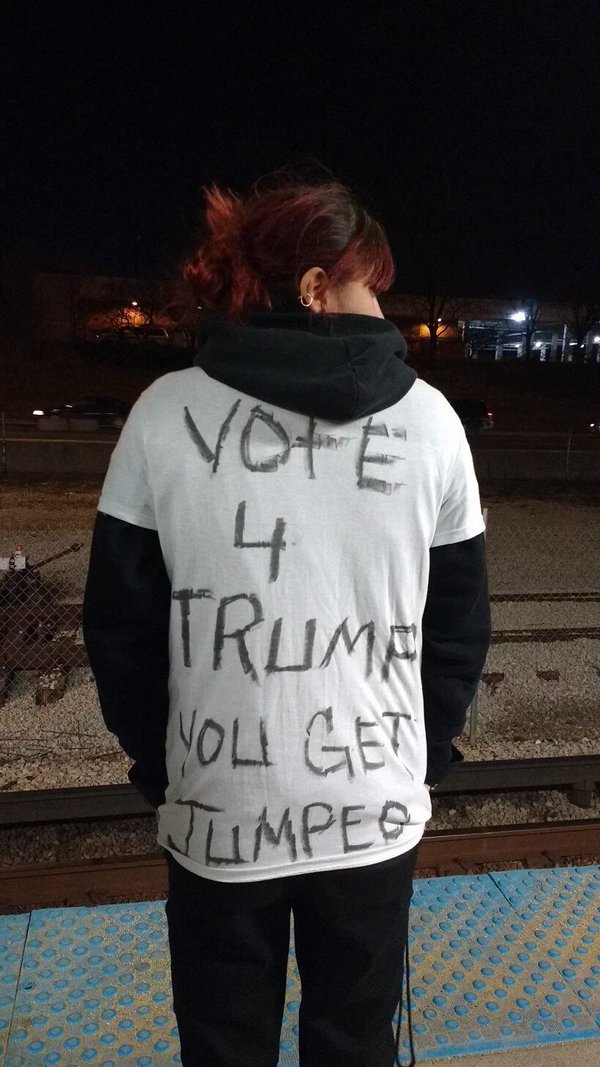 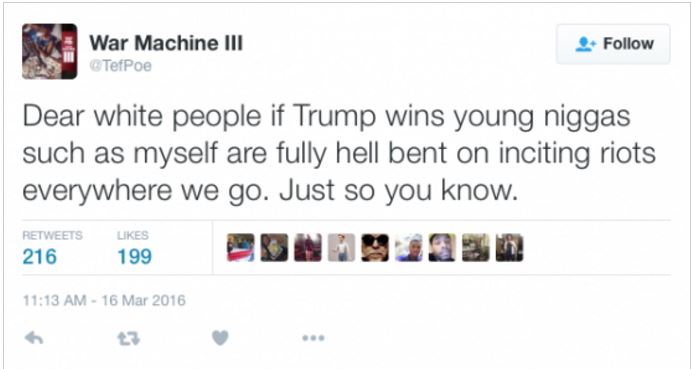 This is populist totalitarianism.  This is an attack on the core principles on which America was founded.  This is the lacing up of the boot.

This we cannot abide.

If you want to support a candidate, that is your right.  Donate to their campaign.  Stump for them.  Go to the polls and vote for them on election day.

DO NOT try to silence the opposition and intimidate your opponent’s supporters.

I promise you, that will not end well.  That is not a threat, not yet, that is a warning.  I do not want to have to recount to day to my children when I witnessed the American kristallnacht, at the hands of those who proclaim to be for Social Justice.

Never again.  I mean it.

There are many of us, millions of us, who do not want the boot in our or anybody else’s faces.  We don’t care who wears it, an elected official, petulant children, social activists, or an angry mob.  We want only to breathe deep of the sweet air of freedom.  To paraphrase MLK, we want everybody to drink from the river of prosperity, freed from the thirst of oppression.

The very first flag hoisted by this nation was emblazoned with the words DONT TREAD ON ME.  A dozen score years later, we still bear that motto proudly.

Since this is the hashtag generation, let me put this in words that you will understand #FuckYourBoot.