They renamed themselves Gun Safety Advocates, but we know they are very short on Gun Safety, actually they are pretty much zero on that department. Teaching the Eddie Eagle program so kids learn to stay away from guns? Oh hell no! They will rather burn the school down than give the NRA a chance to shine at what they do every day. But, do they have a teaching program of their own? Nope… we don’t need no education, Don’t you listen to Pink Floyd?

Now, Moms Demand and Everytown are well-funded by Billionaire Michael Bloomberg and you think he would be willing to open the checkbook and pay for something as inexpensive as a cable gun lock but no, that does not compute in their brains: The only way to be safe is to pass more “sensible Gun Laws” because it is more effective as demonstrated in the past [/snicker]

So what is the latest and coolest for those “Gun Safety Advocates”? A fashion bracelet! 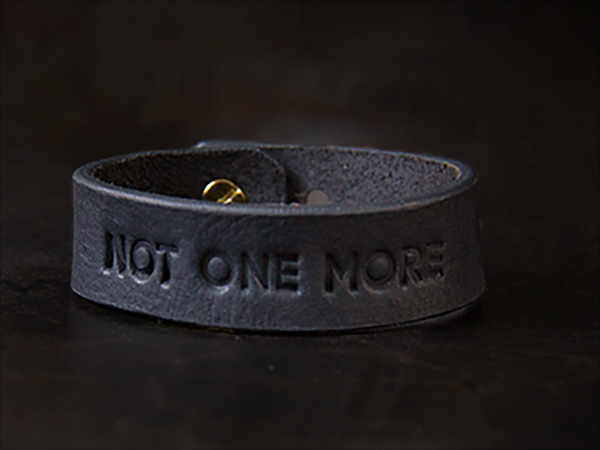 But it is not just another bracelet, but one designed by fashion guru Donna Karan. Isn’t that just so cool? You can own your own High Fashion accessory and be an activist at the same time! Be the envy of other moms!

The bracelets come in two prices: $30 with gold clasp/snap/whatever and $25 for the silver one. And get this: 50% of the monies collected go to Everytown’s cash register to fund more “Gun Safety Advocacy.”

I decided to go to Amazon and check what was available in the true & tried cable gun locks. NSSF has a program, you can probably get cable locks at most police departments for a pittance if not for free and even your gunnie friends without kids or with safes should have a couple lying around. But still, I wanted to know how much somebody would have to shell retail for one:

The $4.99 is the short cable, good for pistols & revolvers and the $6.95 is longer for shotguns and rifles. But let’s round-up to $7 for argument’s sake: For the price of one golden Not-One-More Donna Karen bracelet, you can get 4 cable locks and still have enough for shipping. So, instead of having one asshole posing around with some strip of leather faking care, you could actually provide four real safety solutions to families with unsecured guns.

But wait, there is more! I went ahead and looked for a wholesale price on the cable locks and found it in Alibaba.com 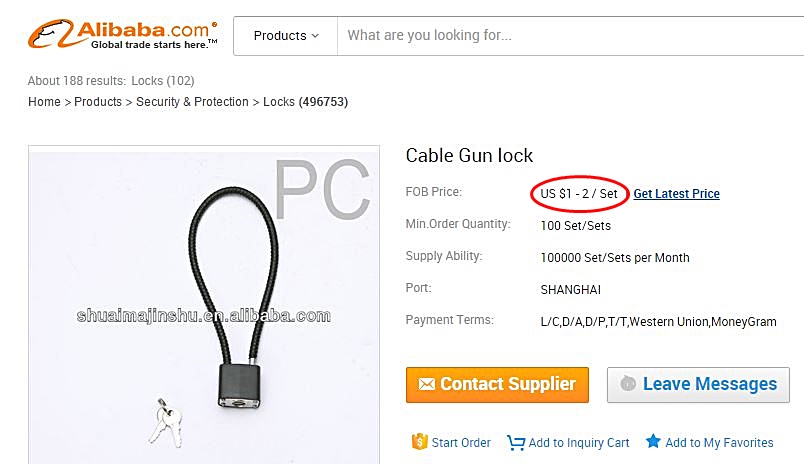 That is right, the most expensive of this lot runs for measly two bucks. And yes, you have to ship them from China and probable import taxes, but even if it doubles to $4, you are now talking about providing seven locks for families with unsecured weapons for the price one skanky and overpriced strip of leather.

I tried to look for Moms & Everytown operating budget, but could not find it. I am figuring by now they have gone above the cool million dollars, imagine how many gun locks that could buy. And if you don’t want to go that way, figure out how much Bloomberg is spending on bodyguards for Shannon Watts or busing people around for astroturf meetings and imagine all that money spent on locks to be given for free to families that need them.

C’mon Mike, c’mon Shannon…  Do it for the children!