On the CSGV and Spinelessness

I spotted this gem of wisdom posted on the Book of Face. 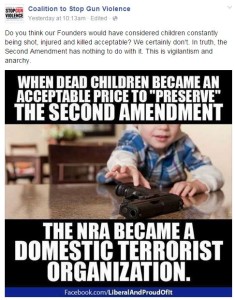 I just can’t take the CSGV (or the Liberals who are proud of it) seriously.  See, it’s not just gun rights they feel there is too high a price on, it’s all rights.

They love to claim the NRA is a terrorist organization.  These people wouldn’t recognize a terrorist organisation if it ran up to them yelling “Allah Akbar” and shot them in the face with an AK.  I mean that with complete honesty and sincerity.

Earlier this year, some people who run the French equivalent of Mad Magazine printed some cartoons about the Prophet Muhammad.  French political cartoons make about as much sense to me as French Art House films…. so not at all.  But it was enough to get 12 people killed.  The sound of the gunfire had died down when Liberals who are proud of it rushed to their computers to explain why free speech had gone TOO FAR!!!  Freedom of expression had crosse
d the line.  Even Garry Turdeau, a man who made his career in political comics, and maybe the most widely read political cartoonist in the US, bravely took a stance AGAINST the First Amendment.

Then, some “knuckle-dragging, mouth-breathers” decided to prove they weren’t afraid and drew some more cartoons of Muhammad.  That ended in a more typical Texas fashion, good guy with a gun and all.  But the same stalwart Liberals made sure that we all understood that free speech was no excuse to offend people.

Why?  Because they are cowards.  All of them.  Yellow bellied, chicken-s**t, gutless, spineless, cowards.

So they bend over backwards, distort every ounce of logic they have, to explain why Americans who believe in unfettered free speech are the bad guys and terrorists who shoot up artists really aren’t terrorists.

These same people just LOVE the idea of doing away with freedom of association and due process and the 1st, 4th, 5th, and 8th Amendments to the US Constitution, as long as the victims are people they disagree with.  How many times has Miguel posted comments comments from the CSGV where they openly state they want the government to arrest, imprison, torture, murder, and genocide gun owners simply because they are gun owners?  Of course they don’t want to do the rousting of gun owners themselves, but they are happy to cheerlead turning American Law Enforcement into Brownshirts… as long as they are not on the receiving end of the thuggery.

It’s not just the 2nd Amendemnt, these totalitarian milquetoast ninnyhammers believe that the price for every liberty enshrined in the Constitution is too high.  To them, you can only have as much freedom as their weak and delicate sensibilities can handle.  The 2nd Amendment maybe the main focus of their rage, but it not the only Amendment that they have in their sights.

And to address what they think the founders believed when it came to the limitations of freedom, I’ll let our Founding Father, Patrick Henry have the last word: “Is life so dear or peace so sweet as to be purchased at the price of chains and slavery? Forbid it, Almighty God! I know not what course others may take, but as for me, give me liberty, or give me death!”

9 thoughts on “On the CSGV and Spinelessness”