One more thing to think about on the Dimmer vs. Switch idea

I then read the Monster Hunter Nation post THE 2ND AMENDMENT IS OBSOLETE, SAYS CONGRESSMAN WHO WANTS TO NUKE OMAHA.

In it, there is this meme: 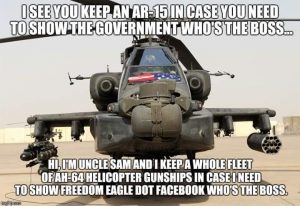 Larry sort of touched on this.

I’m not going to go into a long thing about how irregular forced, especially those familiar with the local terrain have bested, or at least caused significant casualties to, the best trained foreign invading militaries.

Other authors have done marvelous jobs explaining how civilians with AR-15’s can stand a chance against an M1 Abrams or AH-64 Apache.

That is totally irrelevant, and the fact is the above meme is horseshit.

If Civil War 2.0 ever gets kicked off, I can all but guarantee that the US government isn’t going to have working tanks and helicopter gunships, or combat aircraft or drones or anything else like that.  Not in any significant quantities at least.

I work with a lot of veterans.

Here is the inside scoop that the Left does not understand at all.

The people I know who enlisted did so because they are patriots.

The idea of being ordered to attack American civilians to confiscate their guns is abhorrent to them.

Simply put, good luck getting these guys to follow the order from any petulant shit-ass President to march down Main Street of their home town to get them to detain their civilian friends and neighbors.

So what about the tanks and helicopters.

A buddy of mine is a former military helicopter maintenance tech.  He made it clear that if the US military were to use helicopter gunships on American civilians, he personally, and he knows many others like him who, would “sabotage the fuck out of” those aircraft.

Extrapolate that to every weapons system in our arsenal.

The think about every military armory.

Think about how much ammo, how many guns and grenades, mortars, and man-portable ordnance, would be carried out of every armory and magazine by US troops defecting because they are not going to shoot other Americans over some gun ban, or socialist wealth redistribution, or they didn’t give up their big block V8 after the passage of the Green Leap Forward.

The ranks of the US military will be depleted, and everything that isn’t stolen will be scuttled by them on the way out.

The reality is much more likely that American civilians will be patrolling the streets with AT4’s and M-249 SAWs taken from a Guard Armory l with the doors deliberately left open, than 1st Armored will be rolling through downtown Texas in tanks.

This is what Leftist statists do no understand about America.

They see China, Russia and the Soviet Union before that, Venezuela, and other tyrannical countries where the military is loyal to Dear Leader and has no problems oppressing the civilian population, and they assume the US military is just the same.

Our military swears “defend the Constitution of the United States against all enemies, foreign and domestic; that I will bear true faith and allegiance to the same” and following the President’s orders comes along somewhere after that.

You go right ahead and tell a bunch of enlisted men from Iowa or Alabama or Texas that they have to force civilians in Middle America to give up their civil liberties.  See how far that goes.

What I worry about is Leftists in America employing the same tactics as Leftists in Nazi Germany, the Soviet Union, or Venezuela.  That is, enlisting Leftist thugs who are loyal to Dear Leader instead of the Constitution.

24 thoughts on “One more thing to think about on the Dimmer vs. Switch idea”