Congress needs to do more to reduce gun violence say 72 percent of voters, including 50 percent of Republicans, 93 percent of Democrats, and 75 percent of independents.

So nearly half the people polled want some sort of mandatory buyback.  This is now something pushed in one way or another by every Democrat primary candidate.  It started with Eric Swalwell and has metastasized across the party.

Here is the question about buybacks and the data behind it: 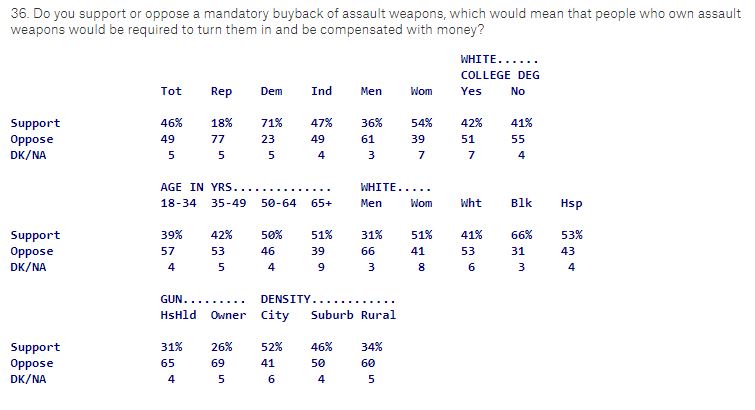 Here is a response from David Weigel of the Washington Post:

Surprised that “mandatory gun buybacks” polled at 46% in Quinnipiac. That’s high! Good for the theory that parents sick of their kids doing mass shooter drills are outnumbering the “actually the AR stands for ArmaLite” people.

Remember everything I said about being pedantic.  This Tweet perfectly exemplifies the point I was trying to make.

71% of polled Democrats don’t know or care or want to know what AR stands for or how the AR-15 semiautomatic.  What they know is that they want to force you to give up your property to some bureaucrat or LEO for a pittance or risk prison or death.

I’m of the opinion that risk prison or death is actually a feature not a bug when the Democrats think about buybacks.

Restrictive licensing and blanket gun bans are now the majority position according to polled voters.

What we are talking about here is the Australiafication of the United States.

The activist media needs to give itself a big round of applause for scaring the shit out of people with 24/7 mass shooting coverage that also increases the number of mass shootings.

As more details emerge about the Odessa Texas spree killer, we learn that once again, there was a failure of law enforcement to properly react to a budding problem.

A neighbor of the Odessa, Texas, mass shooter says she reported him to police last month — after he threatened her with a rifle for leaving trash near his property — but cops couldn’t find his house on account of it having no GPS address or electricity.

The woman told CNN that Seth Ator, 36, would often sit on top of his home and shoot animals at night, which he would then retrieve afterward.

She said cops tried to confront Ator following her report to them last month, but his property didn’t show up on GPS and was difficult to find.

This data is bad.  Very bad.

What is at stake here is literally everything.

The Left in America wants and is running on a platform of demanding millions of Americans give up their rights and property.