Rank Bigotry at Harvard? I am shocked… shocked… not that shocked.

I saw this headline at FOX.

The story then jumps into a longer report from the Washington Free Beacon.

Okay, let’s get into this.

A Massachusetts landlord told a Harvard University graduate student that he wanted her to move out of her apartment because her legally owned firearms made some of her roommates uncomfortable.

“Since it’s clear that Leyla wants to keep her firearms, it would be best for all parties if she finds another place to live,” Dave Lewis, president of Avid Management, said in an email to the household obtained by the Washington Free Beacon.

I am not a lawyer, but I’m not sure how this is legal.  I know being a gun owner can be a legitimate reason not to rent to someone in some states but I assume that would have to be put into the lease agreement signed beforehand.

Here is the e-mail referenced above. 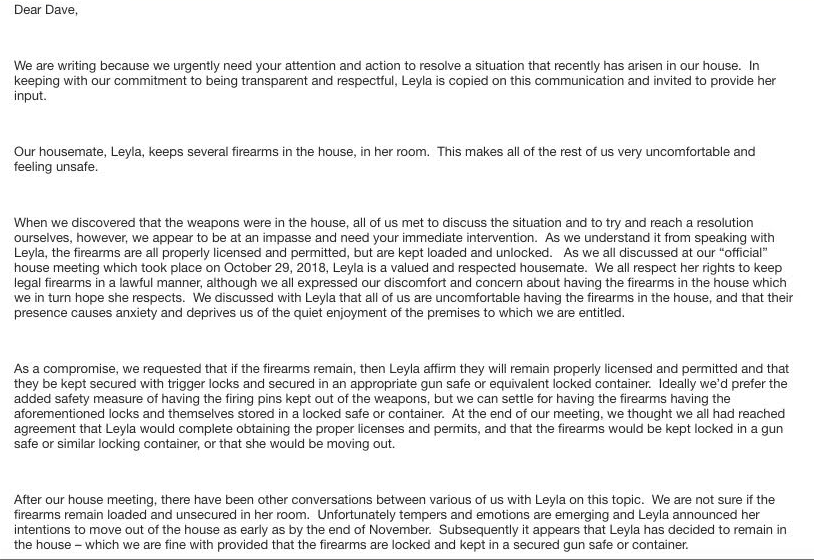 As for the “makes all of us uncomfortable part” I’m not sure how that is defensible in a tenants rights suit.

This from Tenant rights at mass.gov:

Although the landlord of a tenant at will or under lease can terminate the tenancy or raise the rent without reason, s/he cannot do so in response to your exercising your legal rights.

Arguably that includes your Second Amendment rights to keep and bear arms.

Furthermore, there are other complications to this situation.

The request that the student, Leyla Pirnie, move out came after her roommates searched her room while she was not home and found her firearms. That prompted one of the roommates to email Lewis requesting he verify that Pirnie was in compliance with applicable firearms laws.

In response to the email from Pirnie’s roommate, Lewis contacted Captain James Donovan of the Somerville Police Department to inspect Pirnie’s firearms and ensure they were in compliance with Massachusetts law.

Technically, it was her roommates that entered her room, but they ratted her out to the landlord and the landlord call the police.

This seems very dicey, but it gets worse.

“A few weeks ago, I came back to my apartment from a weekend trip and was confronted by one of my roommates who asked if I had guns in the house,” she told the Free Beacon. “After being told far too many lies to count, my roommates finally admitted that they searched my closet, under my bed, and all of my drawers in pursuit of finding my guns.”

While she was given several different explanations for why the roommates entered and searched her room, the 24-year-old said she felt her political beliefs and where she is from played a significant role in the roommates’ actions.

“When I asked them why they were in my room to begin with, they each came up with completely contradicting stories (none of which made any sense), but one comment struck me in particular: ‘We saw that you had a MAGA hat and come on, you’re from Alabama… so we just kind of assumed that you had something,'” she said.

So a bunch of Harvard students and the landlord are just naked anti-Trump, anti-Republican, and anti-Southern bigots.

You’re from Alabama, you must have a gun.  Actually, it’s about a 50% chance, but to use that as an excuse to break into a roommates private room and search through her stuff is pure prejudice.

“What I find uncomfortable is coming home to find out that six people I barely know went into my bedroom without permission and went through every single one of my drawers, without any regard to my privacy whatsoever,” Pirnie said. “My landlord’s e-mail, though carefully crafted, showed tremendous prejudice against my right to legally have firearms.”

Also, depending on the roommate agreement and lease agreement, it may have been a crime.

Again, IANAL, but from what I’ve found online, if the lease agreement or roommate agreement specifies that rooms are private, even though they share the house, other tenants cannot enter a private room.  That is trespassing.

Pirnie said she had been living in the apartment since September without incident, and she kept her political beliefs to herself before the incident. But she did have a Make America Great Again hat in her room.

In response to the email from Pirnie’s roommate, Lewis contacted Captain James Donovan of the Somerville Police Department to inspect Pirnie’s firearms and ensure they were in compliance with Massachusetts law. Pirnie agreed to allowing the police to inspect her firearms and said she was told she is in compliance with all applicable laws. Lewis acknowledged the department’s conclusion that Pirnie was not breaking any gun laws in his email telling Pirnie to move out.

Keep that part in mind because of this next part.

“We discussed with Leyla that all of us are uncomfortable with having firearms in the house, and that their presence causes anxiety and deprives us of the quiet enjoyment of the premise to which we are entitled,” the roommate wrote to Lewis.

We will let the Giffords Law Center to Prevent Gun Violence explain why that is such political horseshit.

Massachusetts is the only state in the nation that requires that firearms be stored with a locking device in place in all cases when they are not in use. Massachusetts’ law requires individuals to securely store firearms in a locked container or equipped with a tamper-resistant mechanical lock or other gun safety device.

That is right ladies and gentlemen, Leyla here was in compliance with Massachusetts safe storage laws, a police captain confirmed it, and still her roommates and landlord say that makes them uncomfortable because someone else could use the guns or they “might go off on their own.”

Pirnie feels she’s being punished for being a gun owner.

“I’m still very much so being threatened out of my apartment,” she said. “Either I leave and incur moving expenses or my roommates move and I incur their rent expenses… Doesn’t seem right.

It’s not just that she’s a gun owner, she is also a Trump supporter and from Alabama.

I would bet a mortgage payment that that because she’s from Alabama and is attending Harvard really offends the sensibilities of her Northeast Corridor compatriots.

How dare they let one of those people* come to school up here!?

*By those people they mean a Southerner, and probably a Christian and Conservative one at that.

When Pirnie and her father rejected Lewis’s request that she move out in the middle of studying for finals, Lewis responded by saying his request “was based strictly on practical and not idealogical (sic) terms.” He then warned that if the other roommates moved out Pirnie would have to pay their rent.

“If the other roommates were to move out, Leyla would need to find roommates to share the place or foot the entire $6000+ monthly rent herself,” Lewis wrote in an email to Pirnie and her father. “Obviously it would be much easier for the others to stay and just fill one room (and I’m confident—were this to happen—that the remaining housemates will release Leyla from any further responsibility under the lease) and that’s why I proposed what I did.”

So I found this at the Official Blog of the Massachusetts Trial Court Law Libraries:

We get asked this question at our library sometimes.

“…joint liability doesn’t mean that you can evict a cotenant. Only landlords can do this. …

This means that cotenants cannot force each other out. If your roommate becomes insufferable, you’ll have to work it out between the two of you unless the roommate’s behavior is alsoa violation of a lease or rental agreement clause (for example, illegal drug use). Although a violation of this nature would justify the termination of both your tenancies (joint and several liability!), you might get lucky if your landlord pities you and lets you stay.”

So it seems that the other six roommates getting the landlord to evict Layla because they are “uncomfortable” with her owning guns, even though she never threatened anybody or even showed them off to people is potentially a violation.  Consider that as far as we are aware she didn’t violate the lease agreement and she can’t be evicted for exercising her legal rights.

This sort of naked bigotry that leads to a violation of a persons rights and access to housing is wrong.

If a bunch of Southern students kicked out a black roommate for having #BLM signs, the Left would be screaming about this.

If a bunch of Christian students asked a roommate to leave because they found her collection of fetish toys in her room, the Left would be screaming about this.

Kick out the MAGA gun owner and crickets.

When the semester is over, Layla needs to take her roommates and landlord to court.

9 thoughts on “Rank Bigotry at Harvard? I am shocked… shocked… not that shocked.”