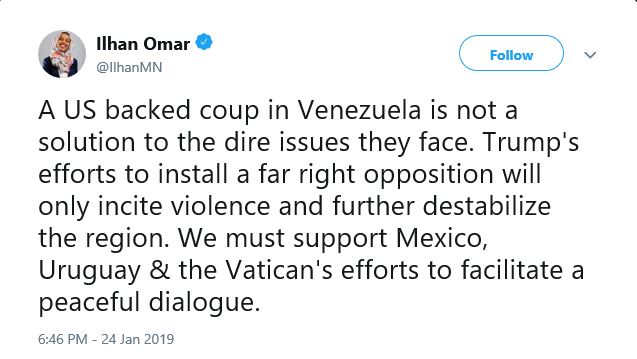 I should have gone with bitch instead of broad, but female dogs are smart. Where do I start?

Coup? Who is doing the coup? The remnants of Blackwater? The Wild Geese? The Dogs of War? I ask because the Venezuelan Armed Forces were pretty much filtered of anybody not loyal to the Chavez Revolution over a decade ago. Any officer above Major has been thoroughly vetted by both the Venezuela and Cuban intelligence apparatus.

Far Right Opposition? Who? Because the last of the Militaristic Right died in 1958 and every government since has been one of hyphen-Social-hyphen of some kind. For God’s sake the first elected president after 1958 was Romulo Betancourt who was one of the founders of the Communist Party of Venezuela and threw a coup attempt under the Red Banner. He got elected under the Social-Democrat colors. Hugo Chavez received the presidency from President Rafael Caldera who was the leader of the Social-Christian party of Venezuela. Basically Venezuela was Sweden when it come to its politics: Buch of semi-socialists sucking the Petrodollars.

Political dialogue is established between to parties under good faith. That has not applied in Venezuela for many years now. Maduro will do the basic steps to dog-and-pony show he is complying with the dialogue and ignoring it at the same time because he is got the power of the gun. Why would he be so stupid as to make concessions? Fucker’s got his pockets lined and can ignore “sanctions” all he wants, plus now he has the backing of the new breed of congress-idiots in Washington who care more about  stick it to the President than seeking a real solution for Venezuela. Fuck, I am sure this falafel-eater did not now what Venezuela was till the President tweeted about not recognizing Maduro and then she had to say something to oppose him rather than finding out what is the problem in a country I bet she thinks is 20 miles south of Cancun and probably a cool place for Spring Break.

PS:If you feel offended by the way I name-called Congresscritter Omar, I can only tell you Thank You!

7 thoughts on “Representative Ilhan Omar is a thouroughly Stupid Broad.”