Security Experts: What to do if protesters surround your car. (And my thoughts)

(KMOV.com) – It can be a terrifying situation when a driver is in their vehicle and is suddenly surrounded by protesters and it happened multiple times during protesting in Ferguson.
So what do you do if you find yourself in this situation? News 4’s Sharon Reed sat down with two security experts who shared their 60 years’ experience.
It’s important to remember to:
Remain calm. Getting excited tends to get others excited.
Slow down. Don’t run anyone over where you will injure them.
Stay in your vehicle. Keep the doors locked and windows rolled up. If you are inside your car, police can identify who are the victims and who are the aggressors

via Security Experts: What to do if protesters surround your car | KMOV.com St. Louis.

The following is my personal take. I am not saying this is what you should do nor is the proper combination of tactical & legal stuff you should do.

After a brief consideration once I was done with the video, I have to agree with the two gentlemen. This particular type of situation is an exercise in self-control where your innermost fibers are screaming for action of some sort. Here is one of those cases in which your ego has to be put away and you should be as calm as one of those poker players at a Vegas tournament holding a straight flush.

Mobs are dangerous and unthinking beasts. There is something in the human brain that makes otherwise good people behave like a pack of predators after Lent and it does not matter their background. You can gather great minds like Newton, Einstein, Planck, Curie, Hawkins, Fermi, Pascal, etc, put them in a mob situation and the average IQ will drop somewhere between Berserker and Hun. The last thing you need is to add more stimuli to their behavior.

As scary and impressive as it might be, people banging with their fists on your car does not constitute immediate threat of deadly force and  “Them sumbitches are damaging my beloved car! How dare they!” is neither a legal trigger to take any action that may harm the idiots.

By the time you are surrounded and the mob has made clear you are not gonna get passage, you better be in that cell phone calling 911.  Your name, location and explanation of what is happening has to come out of your lips as clear as possible (again, you have to play it as cool) and you must stay connected with 911 as it will be evidence in case something happens and you need a back up to explain your actions.

Now we get to the breaking of glass. Modern windshields are a beast to breach and take forever without  proper tools.   So even an idiot with his fists or a bat will have a tough time getting inside due to the lamination.  Modern door window glass is a hard thing to shatter but it does not have lamination, but once stricken, the attacker will have access to you or the inside of the vehicle.

The graphic below gives you the priority of attackers you need to address (this scenario is you alone in the car and all the doors are locked). Notice I do not give  much priority to the guys directly in front or back as they are the farthest away and have to deal with laminated glass. 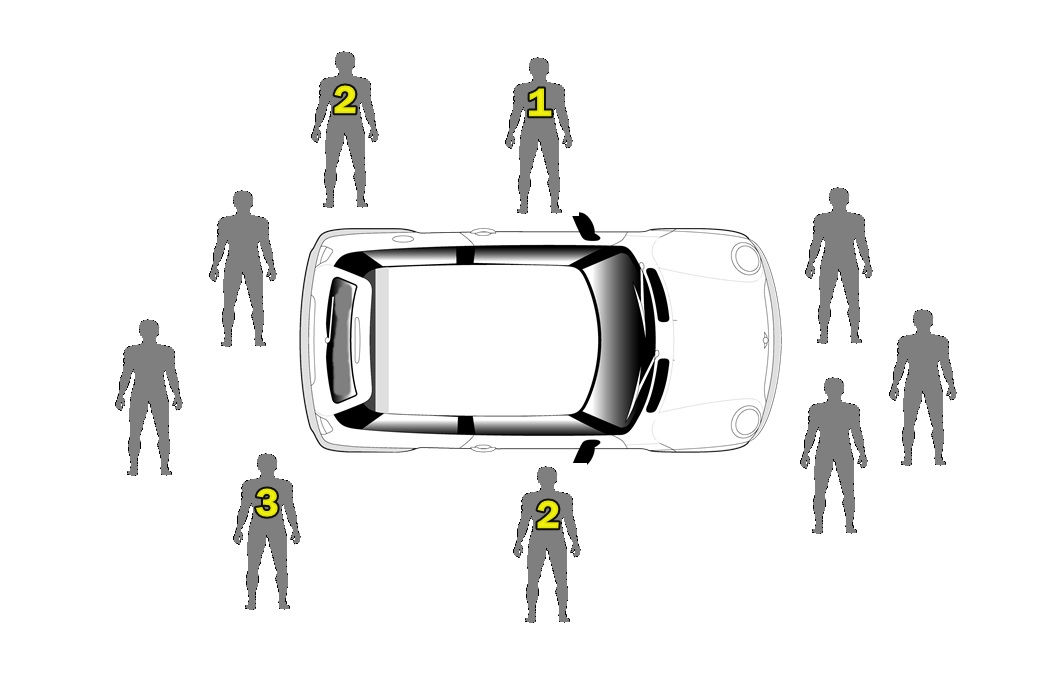 Bad Guy 1 is the closest to you therefore your biggest threat with BGs 2 and BG 3 following in nearness. These are the ones you should pay more attention to and “ignore” the others as any breaching from them will indicate that things have escalated to a credible threat of death or grave bodily harm. CAUTION: Make sure that where you live, Castle Doctrine also applies to you being inside the vehicle, otherwise an enterprising prosecutor may decided you are a good candidate for trial and him getting some extra votes in the next election.

So, if the car has been breached, Why just don’t put the car in drive, get out of the way and whomever gets run over, tough titty? My opinion is that you may end up in bigger legal trouble than using a gun against the most direct attacker. Again, the people in front of the car are not a real threat unless they are on your hood with pickaxes trying to come through your windshield. “But they are in with the other guys, they are conspirators!” good luck trying to prove that in court at your trial for assault with a deadly weapon/murder.  Now hopefully and after seeing one or two of their colleagues sporting brand new bloody holes after detonations, the rest of the mob may disperse (do not count on that) or thin enough to give you a way out, take it! You should be still connected to 911 so you are to advise them that you are leaving the scene because of the recurrent danger and seeking a secure location where authorities can reach you.  If you got disconnected, call again, explain what happened and where you can be found: you are the victim here, you have nothing to hide.  As how far you should go, that is something I do not have a firm answer: Obviously far enough and out of view so you don’t get attacked again but not too far that the police may think you were trying to escape and then thought it better.  My particular plan is at least two blocks straight away and then turn one block left.

And what happens if you are not alone in the car? Well, you go on and develop your plan as this sucker is already too long.  The planning will ned to be adapted depending on the number of people with you and their ages. I don’t have to imagine that having kids in the back adds a great amount of urgency to your actions and require a stricter planning. My plans have the Missus and she is going to do what she needs to do with her own tools.

Again, please remember that this is my opinion and I am not a legal expert or a tactical ninja super operator. I am open to ideas and criticisms in order to make better plans.

2 thoughts on “Security Experts: What to do if protesters surround your car. (And my thoughts)”