Since we are heading again into Mob Rule, a lesson from history.

Last month I posted about how disarmament contributed to lynchings. I happened to bump into another story of what was called a full race war, only the balance of casualties was not so balanced.

7 White versus 68 blacks dead. Even though after the riot began, the black population looted hardware and sporting good stores for guns, it was too little too late.

Those of us who have experienced social dislocation where the normal social behaviors are thrown aside, understand that rioting masses do not respond to civil discourse or standard disposition from Law Enforcement. Mob has a mind of its own and it is ruled by the immediate need to satisfy whatever it wishes at that moment and by whatever means, mostly violent. It is as if humans in a mob develop the hive mentality of Africanized bees  and any semblance of individualism has disappeared.

So how was the rampaging mob mentality dealt with in those days? Usually the Militia was called and given shoot-to-kill orders. But that only worked if you had enough people to do so. The other option is the one that was done after a similar even in North Carolina the year before:

But do not miss the point. I know the full auto part has a lot to do about helping break out the mob drones and convert them into thinking individuals worried about remaining alive, but let’s face it: the effectiveness of the machine gun back then was the quantity of rounds that could be sent into the mass of people, not the speed.

A can of belted .30 06 was the equivalent of our “high-capacity” magazines and drums of today how about that?  Our Evil Black Rifles are the Peace Makers, the tools that will “awe” the modern mobs or make them go “ouch” if they ignore the obvious warning. 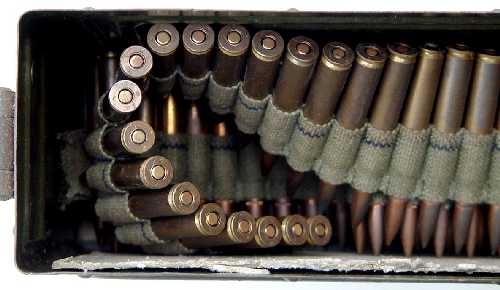 Certain politicians are inciting their followers to go after political targets of opportunity and harass them where they eat, hang out and live. These are fanatical idiots who will eventually behave like a mob and escalate events into full unchecked violence. If you are up and about outside your home, just a simple 7 round magazine in your pocket pistol is not gonna do the job, you need to start thinking about going medium or large size with one or more spare magazines besides the one you have in your sidearm and rethinking really hard to participate in the concept of a vehicular gun.

An at home? Have ugly black rifles (plural) and lots of loaded magazines to feed them, I’d say at least five per gun but more are highly encouraged.

At the end of the day, nothing bring common sense back into the heads of individuals in a rampaging mob that a heavy rate of incoming fire. The life you will save will be your own and your loved ones.

5 thoughts on “Since we are heading again into Mob Rule, a lesson from history.”