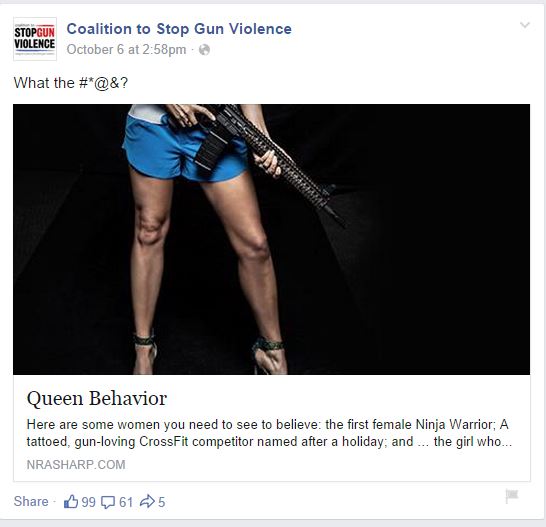 The NRA’s Sharp site had a sample of “Queen Behavior” or basically women that do not need permission by some Feminist authority to be tough & self-reliant.  Fore some reason it sent CSGV into a cuss word.

Now remember, we are the people who hate women, we want to see them dead and abused, pregnant and in the kitchen (add your own ) so the comments left me a bit perplexed (Italics are mine):

Carolanne Prusich She looks ready to murder, opposite of feminine , disgusting.
I don’t know, they look damn fine to me but I am prejudiced that way.

Denise Bober Playing to the type of women who are desperate for male attention IMO. Look at me…I am hard core. Yet wears heels. Something wrong
Dear, they get all the attention they want and have the means to say NO!

Rick Davenport Too, too much testosterone.
Rick failed biology and did not get aa dance to the prom

Cheryl Trivelli That top picture is very sexist. But it’s pretty much a guy club.

Ken Mosley It just goes to show that the stupid acolytes of the NRA is not a male exclusive club.
OK people, get your script together is it an exclusive male club or not?

Ron Brown That bitch got some nice legs. I wish that rifle would go off and shoot her in one of them. That’s all she deserves.
More fodder for the SWATTing Club?

Gabriela Obkirchner That is so painfully stupid. Queen Behavior? What does that even mean?
If you need to ask….go drone.

Daniel Gorman If she were black the NRA would disavow her.
Because any time is a good time to Play The Race Card.

Terri Lynn Ozburn No disrespect, but is this a male cross dresser or a female?
So she both insults women and Crosdressers in one sentence. Bravo!

Lorna Joachim … And so begins a lifetime of psychotherapy!
I am sure you are covered under Obamacare.

Larry Martin These are the type that start relationships with men in Prison. They know little about why trust is so important in a lasting relationship. The sexual attraction is just a starting point, not something to live or die for.Their instincts:– find someone to protect them.– mother a boy into manhood.– bad boy excitement .
This guy did not even bother to read the article and went straight for a Gloria Steinem mental enema.

Tom Zilembo Disgusting bitch.
At least he does not use $20 words.

And there you have it folks.  Insecurity and a bunch of comment that will not make it to the next CSGV video…. for obvious reasons.