The AOC Cult of Personality

Representative Alexandria Ocasio-Cortez is set to star in a comic book as a “Washington Warrior” style superhero.

Devil’s Due Comics have announced that the one-off commemorative comic Alexandria Ocasio-Cortez and the Freshman Force will be available to buy on May 15.

The comic will have two different covers, which have been designed by Tim Seeley and Devil’s Due Comics owner Josh Blaylock. The first shows Ocasio-Cortez in a white suit, holding a cellphone in her hand on top of a defeated GOP red elephant while a blue Democrat donkey nervously looks on in the background.

The second cover shows the same scenario, but features Ocasio-Cortez in a Wonder Woman–style costume.

This is that cover. 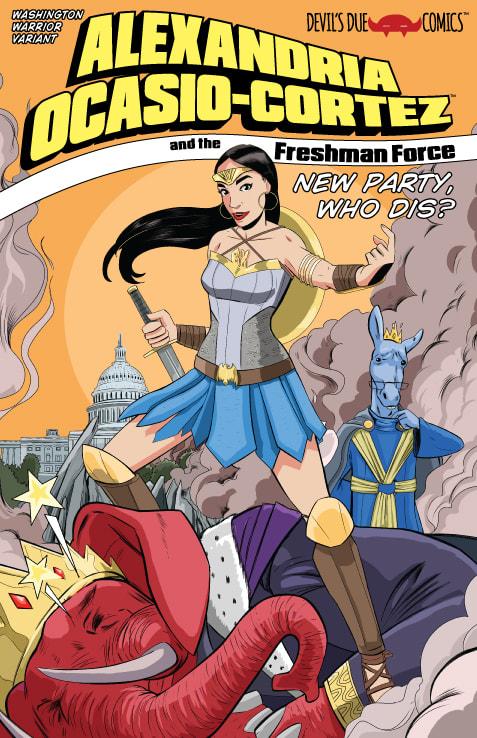 Something, something, level of discourse, until somebody draws a picture of AOC defeating an elephant with a sword.  Than images of political violence is just fine.

The “who dis?” on the cover is in reference to her insulting Joe Liberman when he had the audacity to suggest her radical agenda wasn’t great for a national movement at winning middle American voters.

This just added to her “yasqueen clapback” popularity.

This is incredible imagery for a Freshman Congresswoman who has been in office for 54 days and whose only accomplishment so far has been costing New York City 25,000 jobs ans $27 Billion in tax revenue.

It is precisely because of this kind of social hyper-importance, bereft of any Constitutional authority, that she declares herself “the boss” and dismisses the rest of us proles.

This echoes “real socialism has never been tried” and so she’s trying it and therein lies her power.

The AOC cult of personality is looming to dwarf the Bernie Cult of Personality and she hasn’t been at this game nearly as long as he has.

This is what happens when people turn politics into religion, politicians become superheroes in pop culture hagiographies.

Just wait until the DSA puts on “the Passion of the Cortez” and incites an anti Capitalist pogrom.

5 thoughts on “The AOC Cult of Personality”