Representatives Ilhan Omar, and to a lesser degree Rashida Tlaib are forcing the Democrat party and the Left in general to figure out where is stands on the Jewish Question.

Some of the Democratic Party’s brightest new stars believe Israel is a rogue state that should be treated like apartheid South Africa.

It’s the latest sign that, after 50 years, support for Israel is no longer a bipartisan cause — a dramatic change that will be felt in the wide-open Democratic presidential primary. The young progressives who have ascended to power within the Democratic Party over the last few years want to force what were once fringe views into the mainstream, and significantly change US policy toward Israel.

The Democratic Party’s progressive wing has long pushed for more criticism of Israel policy. Young people and people of color in particular feel a sense of solidarity with Palestinians, and argue that the progressive movement, if it is to be intersectional, must include Palestinian rights.

But the issue has remained a low public priority and one actively suppressed by party leaders as when, in one visible moment, the chair of the Democratic convention refused to recognize a voice vote against recognizing Jerusalem as the capital of Israel in 2012. Changing Democratic demographics and increasingly open Republican support for permanent Israeli occupation of the West Bank has increasingly shifted Americans’ views of Israel along partisan lines.

A Pew Research poll last year found just 27% of Democrats said they sympathized with Israel, down from 38% in 2001. (Republican sympathy has climbed from 50% to 79% in the same time frame.) And younger voters are dramatically less supportive than older voters, according to the 2018 poll — just 32% of adults age 18 to 29 said they sympathized with Israel more than the Palestinians, compared to 56% of voters aged 50 to 64 and voters over 65.

These are horrifying numbers.

No candidate who has announced, or who is expected to announce, their candidacy for the 2020 Democratic nomination has come out in support of BDS. But support from individuals like Tlaib and Omar is pushing the progressive groups that back them to take more aggressive stances on the issue than they might otherwise, a posture which could make it a litmus test in 2020 defining what it means to be a progressive Democrat.

So as the Democrats shift more and more to the hard Left, they more they support Palestinians over Israel.  They more they engage in irrational, antisemitic lines of attack, such as Israel as a apartheid state.

This is why among so many supporters of Omar, every antisemitic statement she makes is defended with “she’s not being antisemitic, she’s starting a dialog about just how much control the Jews have over the US government.”

USA Today reports on this issue in a similar way:

According to a Pew survey, in the dispute between the Israelis and Palestinians, only 27 percent of Democrats side with the Jewish state. Almost equal numbers of Democrats side with the Palestinians, and the subset of left-wing Democrats are pro-Palestinian by almost two to one. So it is not at all controversial for Omar to trash the American Israel Public Affairs Committee for its pro-Israel advocacy, especially among progressives.

The now trendy Democratic Socialists of America have even called for Israel to be eliminated.

Of course, you don’t have to be an anti-Semite to be anti-Zionist — but it helps. We saw this dog whistle becoming more audible during the recent liberal crackup over the Women’s March.

Progressives see Israel as an occupying power, an apartheid state, and fundamentally illegitimate. Furthermore, the concept of “intersectionality” forces them to put the Jewish state in the “bad” category. Activist Yonah Lieberman explains that all progressive issues necessarily tie together: “We don’t see a distinction between supporting Palestinian freedom and supporting a Green New Deal. We don’t see a distinction between believing that the occupation is a moral crisis and believing that health care is a human right.”

Practical politicians know that these issues have nothing to do with each other, but that kind of sensible thinking is abhorrent to the ideologically motivated progressives who are driving the Democratic Party to the far-left edge of sanity. Forcing the formerly moderate-liberal Democrats into the Procrustean bed of progressivism is not a winning model in a politically pragmatic country like the United States. In this sense, the fight over Israel mirrors the general conundrum faced by old-school liberal party leaders trying to explain the facts of political life to their unruly progressive progeny.

The USA Today article ends reiterating something I have been saying a lot.

Contrast the Democrats’ rising anti-Israel focus with the Republican Party’s embrace of the Jewish state. Pew survey data going back to 1978 show that the GOP has always been the more pro-Israel party, but lately Republican support has climbed to 79 percent, more than 50 points greater than Democrats.

Trump is probably the most pro-Israel president in American history, exemplified when he moved the U.S. Embassy to Jerusalem, something three previous presidents had cynically promised and then ducked. (Meanwhile, many Democrats booed Jerusalem as the capital of Israel on the floor of their 2012 nominating convention.)

And while most American Jews inexplicably continue to back even the most left-leaning Democratic candidates, President Trump has received overwhelming support from the more observant Orthodox Jewish community.

Rep. Omar said it was “exciting” that her views are forcing Democrats to finally “have conversations that we weren’t really willing to.” Indeed, Democrats should have an open, honest debate over whether their party is rapidly becoming an incubator for the kind of anti-Semitism that has infected the liberal parties of Europe.

Jewish Democrats who think this controversy is only about Israel could be in for an unpleasant surprise.

Progressives love a plucky underdog.  They love feeling like they are fighting for the little guy.  I’ve heard this described as Selma Envy.

In the Progressive canon, Jews are too rich, too white, to successful to be victims.  They don’t see Israel as the ancestral home of the Jews but a European colonial outpost.

So which “little guy” do the Progressives fight for?

Men like Hakim Awad, a man described by Palestinians as a “hero and legend.”

What did Hakim Awad do? 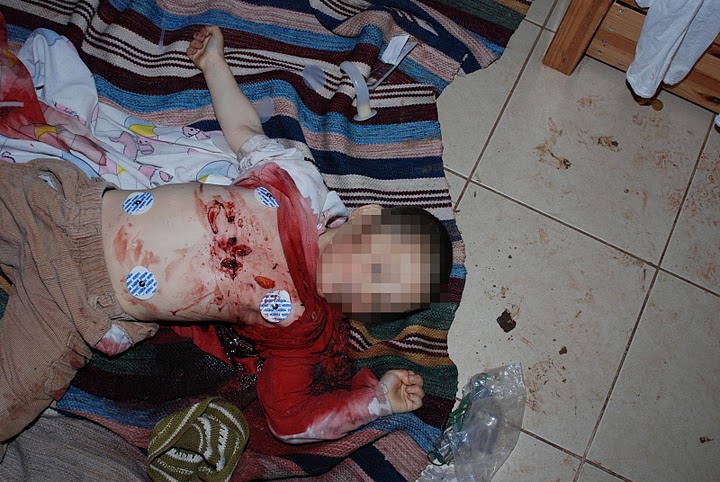 His younger sister, Hadas Fogel was decapitated in her crib.

When Congresswoman Rashida Tlaib stands with an Palestinian activist who supports Hezbollah this is what she stands with.

When Congresswoman Ilhan Omar backs BDS, this is what she is backing.

It needs to be made perfectly clear, BDS is a terrorism backed campaign for Jewish genocide.

When Rashida Tlaib backs a One-State Solution, she is backing the mass murder of Israeli Jews.

The president of the Herlz Institute explains this more succinctly than I could.

Listen, dum-dums:
There's a real-life Jewish state with millions of Jews loyal to it. The Jews here are not going to give it up in exchange for any other political entity your imagination can concoct. The chances of dismantling this state without wholesale killing of Jews: Zero.

Thousands of Jews fought and died to found and defend Israel as a Jewish state.  Thousands more put their lives on the line every day to continue to defend that state.  The idea of these people simply accepting the surrender of their nation and a total restructuring of the conditions under which they live, their very identity, by a UN declaration is absurd.  The only way a one state solution would be implementable would be the military defeat of Israel by an international coalition.

But the Democrats deflect from all of this by saying “no, she’s just talking about AIPAC.”

Pew Global conducted a study Islamic Extremism: Common Concern for Muslim and Western Publics.  This is what they found: 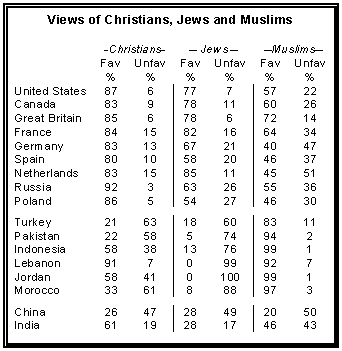 Nearly 100% of Middle Eastern Muslims had unfavorable feelings about Jews.

The ADL conducted a similar poll and found across the Middle East and North Africa, that 74% of people in general had unfavorable feelings about Jews.

It is reasonable to assume that if Representatives Ilhan Omar and Rashida Tlaib represent their constituents, they have between a 74% and 100% chance of being Jew haters entirely from an ideological standpoint.

Fareed Zakaria wrote an op-ed in the Washington Post in which he said:

“I don’t know what is in the hearts of the two representatives,” Zakaria, who is Muslim, wrote about Omar and Rep. Rashida Tlaib, who has also made controversial statement about Israel. “But I believe that Muslims should be particularly thoughtful when speaking about these issues because anti-Semitism has spread through the Islamic world like a cancer.”

Still, Muslims love to taunt Jews around the world with the chant “Jews remember Khaybar” which is a reference to the massacre of the Jews at the Khaybar oasis in Saudi Arabia by Muhammad.  That predates the rise of Hitler by only 1400 years.

This is, at the New York Post puts it “Here’s the anti-Semitism the media doesn’t want to mention.”  The Left in the United States does not, for reasons of intersectionality, want to address Islamic Jew hatred.  They give it a free pass, cover for it as “a discussion about AIPAC” or “lobbying money.”

The only antisemitism the Left seems to see is that coming from the fringe element of the white supremacist Right.

Yes, while one nut job killed eleven Jews at a Synagogue in Pittsburgh, which was universally condemned, one random nut job cannot commit genocide against half the world’s Jews.  Which is exactly the policy that Rashida Tlaib went to Congress to implement, and every Democrat that refuses to oppose BDS has co-signed.

So what are the Democrats doing about this?

They are passing a second resolution against antisemitism.

It’s a bullshit resolution.  It does not call her out by name.

Just to be clear, the resolution condemning Congressman Steve King’s vaguely white supremacist statement called him out by name,

This lack of specifying Congresswoman Omar by name means that the Democrats, including Omar herself, can vote for the resolution then continue to say horrible antisemitic things under the context of “a discussion about AIPAC or lobbyist money” because the only thing they consider to be antisemitic is alt-Right and white supremacist antisemitism.

The woke, Progressive Left is going to fail the moral test as it goes through the exercise of this resolution.

They defined racism as “power plus privilege” and clearly when they believe the Jews are both disproportionately privileged and powerful, undermining them is not a form of racism.

The have become the party that supports and defends anti-Israeli and anti-American terrorists.

This is the future of the Democrat party, unadulterated antisemitism with a veneer of intersectional concern.

I’ve said this before, but I will let USA Today say it again:

Jewish Democrats who think this controversy is only about Israel could be in for an unpleasant surprise.

There is no future for the Jews in the Democrat party.