While the Democrats and media are eulogizing Suleimani, I thought I would share a little bit more of why that pile of pig shit in an Iranian uniform needed to be sent to hell courtesy of the United States Military and the Lockheed Martin Corporation.

Explosions are powerful, but that power diminishes quickly.

This is why lots of smaller explosions are more effective than one big one at destroying an area, and why going from a kiloton to a megaton doesn’t increase the blast radius of your bomb by 1,000 times.

There are two phenomena in explosive science, the Misznay-Schardin effect and the Munroe effect, that say roughly the same thing.  The force of an explosive occurs perpendicular to the surface of the explosive.

A flat sheet of explosive will drive most of the force perpendicular to the large flat surfaces (Misznay-Schardin effect).  This is the principle behind the M18A1 Claymore mine.

A cavity in an explosive directed towards a surface will form a jet of gas that has increased armor-penetrating capability (Munroe effect).  This is just a bunch of vector addition.  The explosion occurs perpendicular to the surfaces of the inside of the cone, which add up and the resultant vector is very large, coming out of the center of the cone.

This is a shaped charge, and many people are familiar with it.  The problem with a standard shaped charge is that the jet of high-velocity gas that burns through armor dissipates quickly.  Just like a lens, there is a focal length that the “beam” of gas converges on, and much beyond that, it spreads out and loses its effectiveness.

Lastly, some metallurgy.  There is a phenomenon called adiabatic shear.  This is when metal is plastically deformed so quickly the heat can’t dissipate in the metal.  If you are familiar with machining, this is why cutting chips are so hot they will turn blue and burn you.  It’s not friction, it’s adiabatic shear.  Enough adiabatic shear and you can actually melt metal.

This has some awesome weapons applications, like depleted uranium rounds which are self-sharpening instead of mushrooming to penetrate armor.

So, you are an arms designer and you want to make a small warhead that is very effective against armor at extended distances.

You create a warhead with a concave depression, lined with a highly ductile, high-density metal, like a contact lens.  The explosion starts in the center of the depression and radiates outward.  This flips this contact lens inside out, imposing enough adiabatic shear to turn the metal into a semi-molten mass, and the resultant vector gives a higher velocity than the explosive velocity of the explosive and what you get is a molten metal slug traveling at upwards of 6,000 fps.  The higher the density metal you chose, the further the range and deeper the penetration your slug has.

This is the science of the explosively formed penetrator.

The good news is, this is not an easy thing to make effectively.  The shape of the concave disk, the explosive, the detonator, not something you cobble together in a cave if you want it to work well.

This is where Suleimani comes in.  The Iranians had the ability to make EFPs, and were providing them to insurgents in Iraq as well as other Shiite militias.

The first generation of M1116 up-armored HMMWV that were used in Iraq were capable of defeating the smaller homemade IEDs that were being used against our troops.  Sure the vehicle was blown to shit, but our soldiers survived and that was what was important.

Then came Iranian made EFPs turned into IEDs, which became known as “Superbombs” and what The New York Times called “The Most Lethal Weapon Americans Faced in Iraq.”

EFPs killed at least 196 U.S. troops and wounded nearly 900 between 2005 and 2011, defense officials revealed in 2015, and Castner said a high number of amputations throughout the war were the direct result of the weapons. In the 2006 attack, slugs took the legs off a soldier and a gunner, he wrote in his memoir, “The Long Walk.”

These weapons were made and smuggled into Iraq by Iran.

Soleimani’s Quds Force provided training and logistics to militants in Iraq, along with far-reaching EFP supply routes and factories inside the country, the history said, where knowledge and tips on their construction filled CD-ROMs circulated among bombmakers.

Not just that, Iran made technological improvements to enhance the destructive power of these weapons against our troops.

Many were concealed in foam blocks made to look like curbs and rocks, with a telltale indicator of a passive infrared lens peeking through that earned the nickname the “Eye of Allah” from U.S. troops.

Iranian-backed bombmakers were also creative in their defeat of U.S. countermeasures, Castner said.

The infrared laser, operating in a manner similar to the safety beam used for garage doors, is used to trigger the explosion. So-called “rhino” horns were attached to vehicles to set them off prematurely, but bombmakers would revise their design to account for the horns and revamp the geometry of the array to make sure the slugs passed through drivers, passenger compartments and engines, he said.

This is how a bunch of barely literate Iraqi insurgents were so effective.  They had the Iranian military-industrial complex backing them up, doing their R&D.

And what did this look like for our troops on the ground? 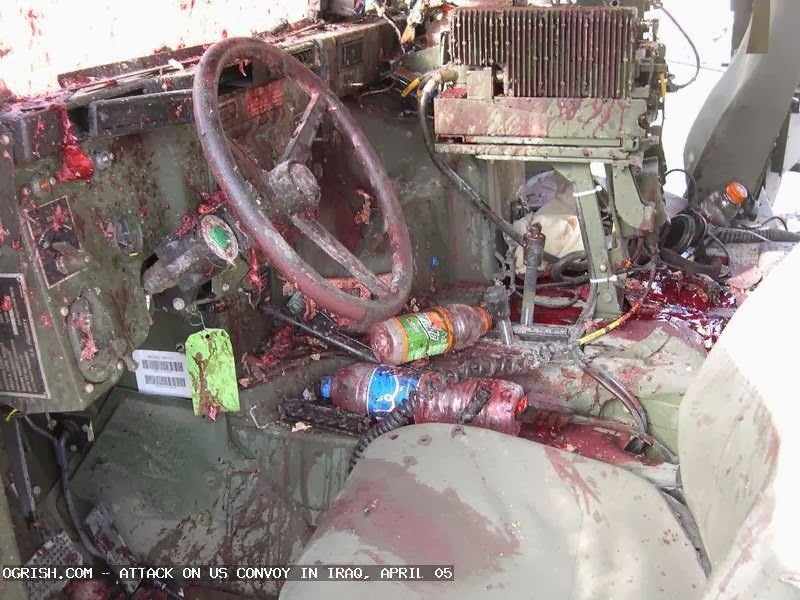 All that gore on the steering wheel and dashboard is what is left of an American soldier who got hit by an EFP made in Iran and smuggled into Iraq by Soleimani’s Quds Force. 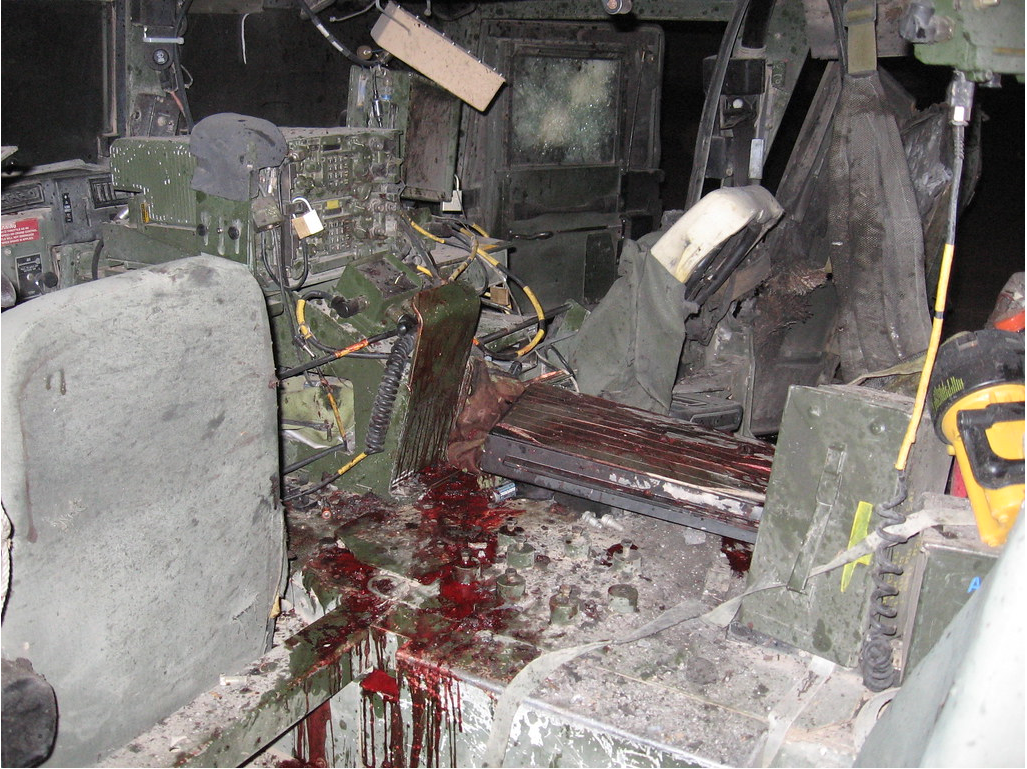 Pools and blood and torn off limbs.  That is the legacy of Soleimani.

When members of Congress, Hollywood elites, assholes on Twitter, and gigantic pieces of shit like Michel Moore defend Iran or criticize Trump for taking out Soleimani, what they are doing is covering for a man who has the blood on his hands for every single one of our military who was wounded or killed by an EFP.

These fetid masses of human garbage, posting their feculent emesis all over Twitter deserve nothing but the contempt of traitors.