A friend (we’re both Bosnian) showed me a videotape of an episode from “Murphy Brown” from about a month or so ago.

In the episode, a friend of “Murphy” was a war correspondent in Sarajevo, where he was shot in the arm by “a Serb sniper.”

Back in US, he meets another of “Murphy’s” coworkers, who was shot in the arm with a stray .45 during a gang shootout.

The war correspondent was impressed, because he had only been hit with “a .22”

In fact, the correspondent informs viewers, “In Sarajevo, you’re more likely to be hit with a .22 …”

(How many people (besides MB’s regular viewers) believe that
Serb “snipers” use .22 in Sarajevo?!?!)

Lesson for you:
Get rid of handguns, they will make your neighborhood more dangerous than Bosnia.

Lesson for me:
The incendiary/phosphor anti-aircraft rounds that were blowing apart my friends and relatives in Sarajevo were really just rimfire cartridges.
I stand corrected  :-(((
And when the UN recently fabricated a story to int’l media and then blew up a string of Bosnian bunkers in Sarajevo, they too used .22

On a past post, we saw that Handgun Control Inc had meetings with Hollywood artists, directors, producers and writers in order to push Gun Control thorough the movies and TV.  The amount of disinformation generated by them has been colossal and the only reason it does not have the same punch it has today is because there are other outlets where their message is challenged with facts.

Still, institutional inertia is a difficult monster to stop (or to get started, pick your Newton’s.) A couple of weeks ago, NCIS: New Orleans showed a scene in which the medical examiner complained that she’d cut her finger while extracting a Black Talon bullet from a body. She also made the comment that doctors have been trying to have the bullets banned for 10 years. 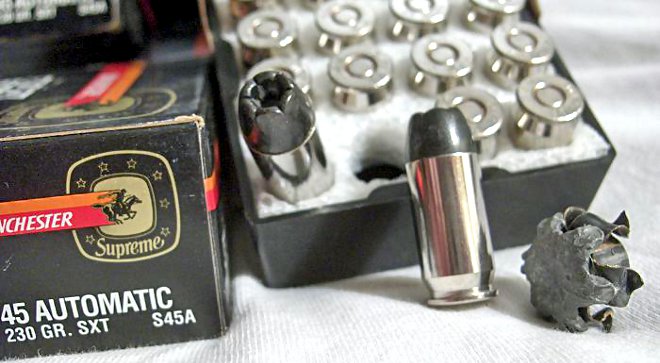 Now the funny thing is that Winchester stopped production of the Black Talon in 2000. That is enough to confirm that TV writers know pretty much crap about ammunition and puts serious doubts about their capabilities to do a basic Google search.

But the most probably answer is that they are still following a protocol of narratives introduced back a couple of decades ago and being the smug idiots they are, the thought that things change in the Gun Culture (as well as in life) is foreign to them.