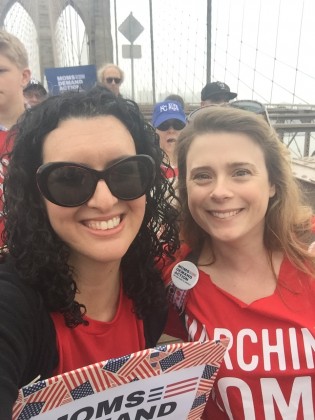 That is the quote from Jaime Pessin (pictured left), honcho for the New York chapter of Moms Demand.

Now, I am confused. I thought 18 U.S. Code 922 covered pretty much illegal transactions with firearms at interstate trafficking level and even local. I don’t expect that some mommy in NY knows about this particular federal law, specially since she gets her talking points from Bloomberg and Co. but Senator Gillibrand should be able to ask one of her assistants and check to see if that particular line of bullcrap is real or not.

Unless, of course, we are moving goalposts again and “trafficking” is a cute way to target interstate transactions among private individuals via places like Gun Broker. We know that the Opposition gets all moist in the nether regions about the “unlicensed dealers” (private citizens) selling their guns to other “unlicensed dealers” across the nation, even though such transactions have to go through a Federal Firearms License holder. They would love to have that stopped in its tracks not because those transactions are tied to any criminality, but because they represent freedom.

We are going to have to keep an eye on this one.