When the Catholic Bishops for Gun Control help your bill.

With Florida’s bill  to expand Church Carry heading for the Governor’s desk, there has been some amount of hair pulling among media, but not at the rate you’d think. The problem is this bill when was being discussed in committees found some supporters  on the House Democrat side, specially those who had churches in not-so-nice neighborhoods and may have been subjected to crime activity themselves.

Catholics bishops in Florida seem to always have been on the side of Gun Control. It ranks me that a person can be a child molester or a murdered and he will be welcomed with open arms in a church with a school in the premises, but me, the armed and very law abiding citizen is treated like a leper was treated in some passages of the Bible. Even the Catechism of the Catholic Church defines self defense and the defense of others as “… not only a right but a grave duty for one who is responsible for the lives of others” but yet, Bishops do not find contradictory to deny parishioners to carry the tools of Self Defense in the House of God.

So reading some articles about the passage of the bill earlier today, I found a letter the Bishops sent in March when the original unmodified bill was being discussed: 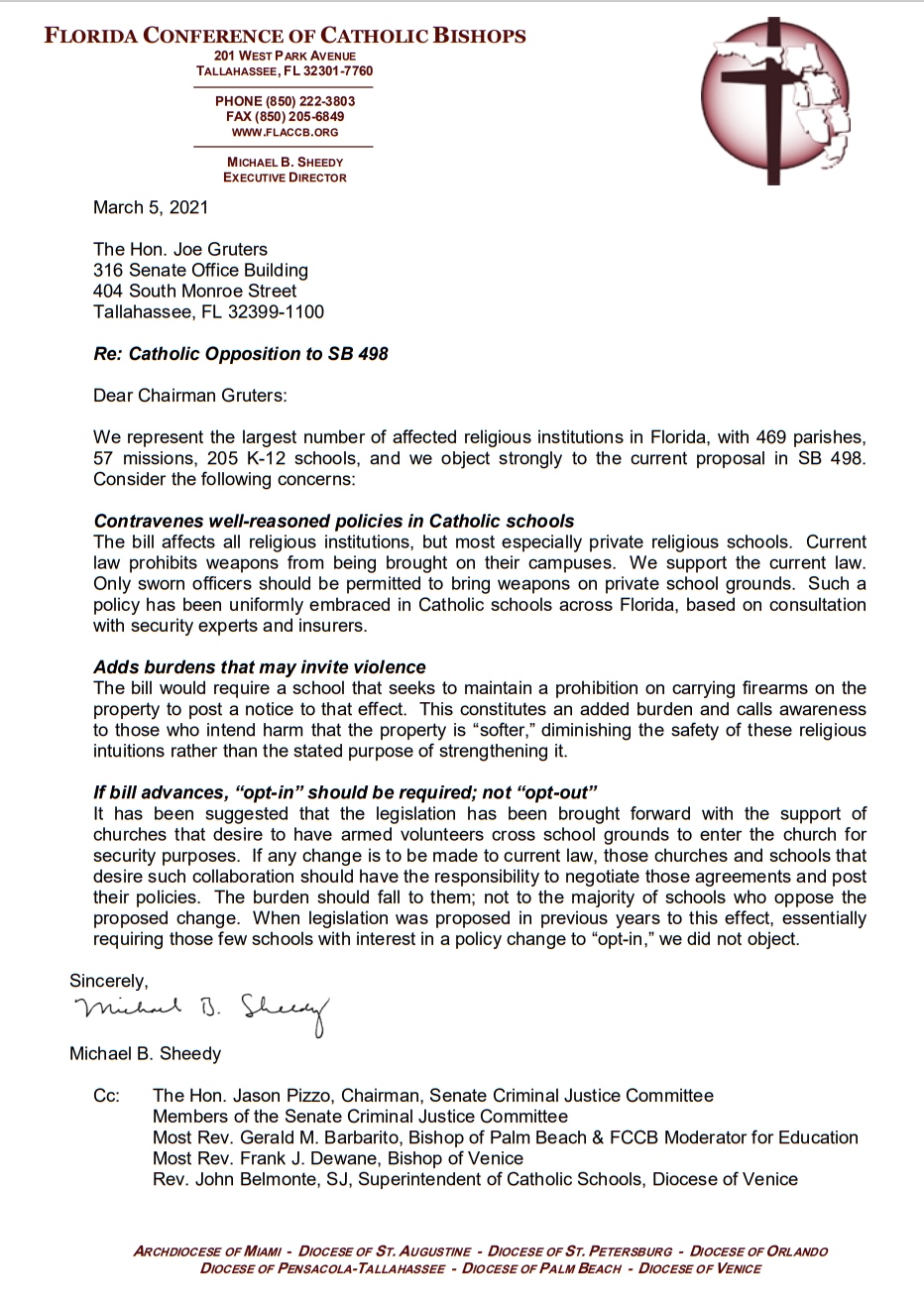 First and right out the bat, discard the notion of “Catholic opposition to SB 489.” Catholics did not oppose the bill but the Bishops did. I know they think they speak for all of us, but not even the Lord suggests that.

Gun Free Zone signs in Florida have little to no power behind it. Unless a location specifically mentioned in the statutes as GFZ, anybody can paint all the gun signs they want in a business or location and you can pretty much ignore them and carry concealed understanding that if caught and asked to leave, you do so immediately. Seriously, don’t argue as trespassing with a firearm is a felony in Florida.

If you remember, at first I complained about the law opening the door of optional Gun Free Zone signage with the power of law behind it which included penalties. This was just too much of a possible temptation for future Legislatures to cave when other sections of society demand they wanted their own signage with penalties for ignoring it. The requirement was eventually dropped because religious institutions figured out the obvious: It made them a target. It was so obvious even the Bishops got it:

The signage requirement was eventually dropped and the bill was reduced to a very simple and straightforward text without new penalties or burdens for those with a Florida CWL.

It strikes me a hypocritical by the Bishops that they would gamble and hide on criminals not knowing that churches without schools on property were allowed to have armed parishioners while most Catholic churches with schools couldn’t.  If you are proud of your stance against guns, the shout it to the four winds and do not hide behind the skirts of other denominations and then claim moral superiority.

And now, I am just waiting for the Governor to sign the bill so I can wear my Sunday’s best.

5 thoughts on “When the Catholic Bishops for Gun Control help your bill.”