Who are the real insurrectionists? ICE raids inspire the Left to violate federal law.

Over and over again, the anti-gun Left accuses us gun owners, especially those of us who don’t want to give up our assault rifles and/or are vocal about the Second Amendment of being a bulwark against tyranny, of being insurrectionists.

Then the Trump Administration announced that Immigration and Customs Enforcement would conduct raids and deport 2,000 illegal immigrants who were ordered to be deported by judges for non-compliance with immigration law.

“All of those in violation of the immigration laws may be subject to immigration arrest, detention and – if found removable by final order – removal from the United States,” an Ice spokesman said.

These were people who were ordered to appear at court to present their cases to stay in the United States.  They failed to appear in court, so were ordered for deportation.  These people entered the country illegally and then broke the law again.

It’s not unlike failing to show up at traffic court.  You are going to be found in fault and probably a bench warrant issued for your arrest.  Except in this case, what is on the line is your ability to stay in the US.

For rational Americans, when the situation is explained like that, the deportation order makes sense.

You can’t just brazenly violate the law and expect to get away with it forever.

For the radical Left, that is racism, bigotry, and the kind of dehumanizing behavior that is only seen in Nazi Germany.  Consequently, it must be resisted at all costs. 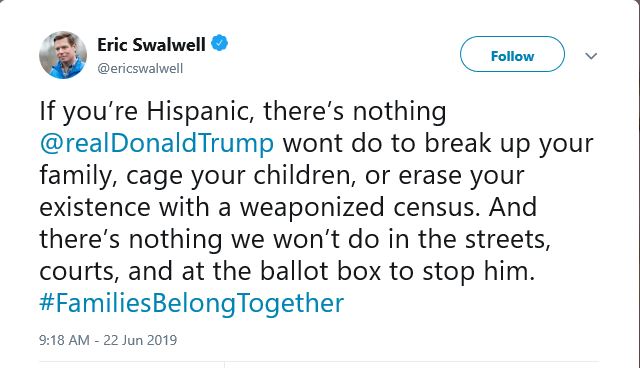 He was not the only legislator to be this dumb. 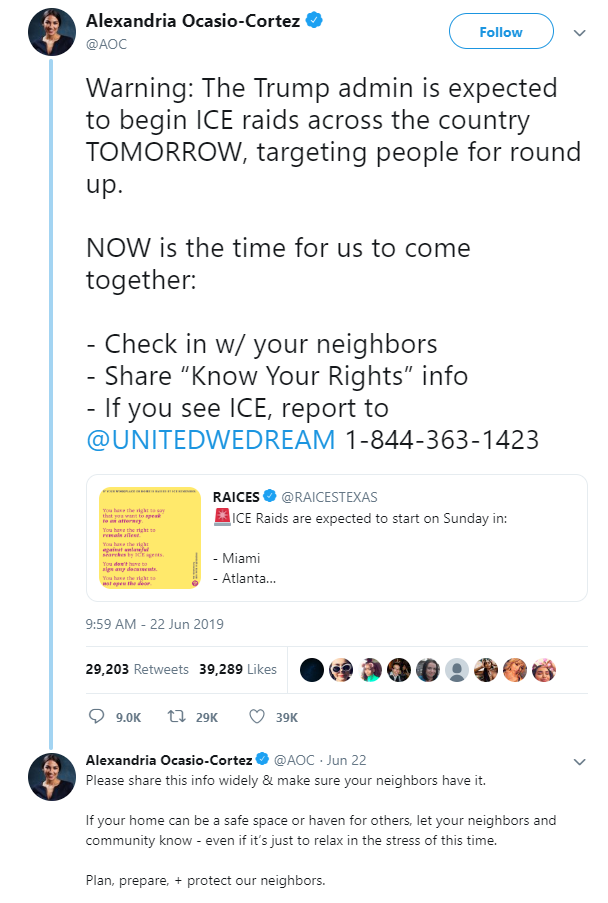 She is advocating having people hide their illegal immigrant neighbors who have violated the law and were ordered for deportation by a judge.

She is really pushing the Holocaust similarity here she imagines woke Leftists hiding illegals like the family of Anne Frank from ICE.  Does she realize what she is telling followers to do is harbor fugitives

It wasn’t just the resistance in Congress that decided to announce their intentions to resist the law.  Several city and state governments have as well.

CA will always defend the rights of our immigrant communities.

If ICE agents show up at your door, know your rights:

-You do not have to open the door—you have the right against unlawful searches.

-You have the right to speak to a lawyer.

-You have the right to remain silent. pic.twitter.com/wNokTSPdhD

These raids were supposed to be unannounced for the safety and security of the ICE agents carrying them out.

When the governor of California goes to Twitter to announce these raids, he’s putting ICE agents at risk and making it harder for them to arrest the people they have warrants for.

This undermines the lawful law enforcement actions of the Federal government.

So Chicago won’t help ICE at all, even in identifying illegal immigrant criminal gang members.

Guess, by the way, who is responsible for the second highest number of shooting in the Chicago area?

So with over 200 homicides to date, why would the city want to get rid of its illegal immigrant gang member?  I guess the new mayor wants to set a new homicide record for the year.

We gun owners are told we are dangerous people, who love our guns so much we don’t care who gets killed, just for the fantasy of being insurrectionists.

Then the Left decides it loves illegal immigrant criminals (including gang members) so much, they are going to resist Federal law enforcement doing their job of enforcing the law and keep Americans safe.

So tell me again, who are the real insurrectionists?

3 thoughts on “Who are the real insurrectionists? ICE raids inspire the Left to violate federal law.”