American Bar Association does not like Stand Your ground: Color me surprised. 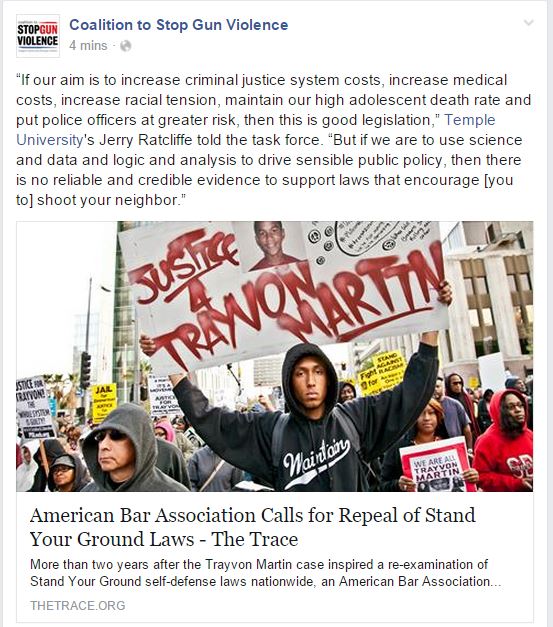 Not giving click bait to The Trace, but apparently the ABA gave them an advance copy of super-duper secret full report investigation about Stand Your ground that claims the following:

Let’s go with the first assertion:

Stand Your Ground states experienced an increase in homicides.
Taking Evil Florida as example, from 2006, the first full year of implementation of SYG to 2014 which is the last year FDLE has provided data, the murder rate  has gone from 6.2 per 100K to 5 per 100K. I don’t know in Common Core, but old school stats call that a decrease.

Multiple states have attempted to repeal or amend Stand Your Ground laws.
Again in Evil Florida, they tried their best with full cooperation of the Media and assorted Useful Idiots and did fail. Floridians by far and large like SYG and they are not willing to go back to when prosecutors played politics with the lives of citizens defending themselves.

Victims’ rights are undermined in states with statutory immunity from criminal prosecution and civil suit related to Stand Your Ground cases.
I venture a speculation and say this is the real reason the ABA is opposed to SYG/Immunity: It is bad for their pockets. And did you notice the use of the word victim? It is being applied to the critter that needed the defense and not the person who had to use force to stop the attack. Who has not heard of cases in which a criminal or his family has sued in civil court even though it was their precious snowflake the one that wanted to carve his initials on a stranger and get his money or her sex? We still hear the lamentations of “He was a good boy! Just because he was flinging a machete does not mean he deserved to be shot!” from weeping mothers and other relatives?

The law’s application is unpredictable, uneven and results in racial disparities.
The application of the law was predictable: Some prosecutors and judges had no problem with it and some hated it so much they did their best to screw with it or misapply it. It seems it ended with the case of of Gabriel Mobley, who was thrown under the bus by the legal system and had a successful appeal that cemented Stand Your ground in Florida.

As for the use of the race Card to eliminate SYG, we go to the original source of the Anti SYG movement: The Tampa Bay Tribune and their database of cases. As of today, the numbers were as follows:

Cases where the SYG claimant was Hispanic: 10
2 convicted, 7 justified, 1 pending.

Black by a factor of two to one had a better outcome claiming SYG. Hispanics are in a three to one ration while Whites are almost even. So much for being a racist law.

Cases where the SYG claimant was Hispanic: 5.
1 convicted, 3 justified, 1 pending.

Although Whites improve their ratio, Blacks maintain the two to one in favor and Hispanics their three to one.

Out of the total amount of cases (249), Blacks comprise 33% even though they are only 18% of the population in the State of Florida. Any claim that SYG is racist is patently BS according to the numbers provided by the Tampa Bay Tribune.

I have always sustained that SYG is hated within some in the legal profession because it literally took their  power to screw with people’s lives and not having to pay for it. It has to be intoxicating to be God-like and with a flick of the finger destroy somebody’s life that did nothing other than stop a deadly force attack. The idea that a prosecutor should strive for justice appears to be lost in the care to have great conviction records and successful re-election campaigns.

That is a sad commentary on our Justice system.

15 thoughts on “American Bar Association does not like Stand Your ground: Color me surprised.”