You may remember Brianna Wu from some previous posts.

She is the crazy, radical feminist who wants to create a universal basic income because self serve kiosks have proven to be more economic than paying people $15 to screw up your order at McDonald’s and not correctly make change, and thinks that Elon Musk wants to take over the world by setting up a moon base to launch rocks at the earth.

She also supports disarming Israel and letting the terrorist invade it.

Given those platforms, I’m surprised she lost her bid for Congress in 2018, so she’s updated her website and is making another stab at it in 2020.

If at first you fail miserably, go even more bat shit insane.

She decided that she was going to take to social media to attack gun owners with a bunch of bullshit and projection. 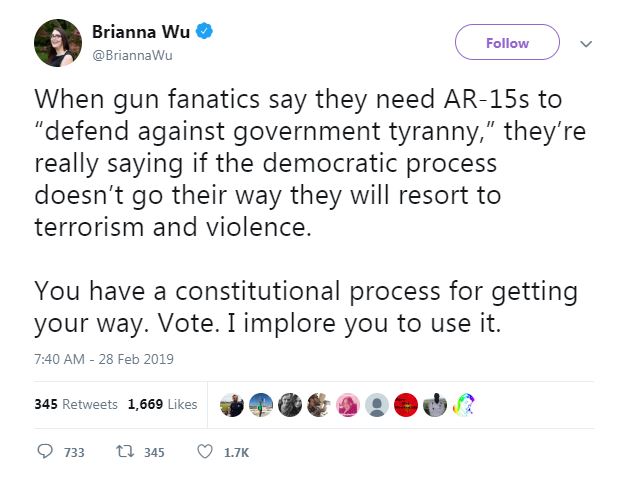 I seem to remember another group that was so upset when their candidate lost that they took to the streets and started beating people up.

What were they called?

They were in black masks and hoodies…. that’s right…. Antifa.

That group didn’t include all the other feminists and Leftist who took to the streets to cry and wail and act like mewling, tantruming brats when Trump won.

The defense against tyranny that we are worried about is, like what Miguel pointed out the other day, is the government deliberately starving people to death.

I’m more worried of someone like AOC using her text chain of 200 progressive activists to incite a pogrom against Conservatives or Omar and Tlaib invoking Korematsu against Jewish supporters of Israel as foreign agents.

Wu has been on an anti-AR-15 crazy pants kick this week. 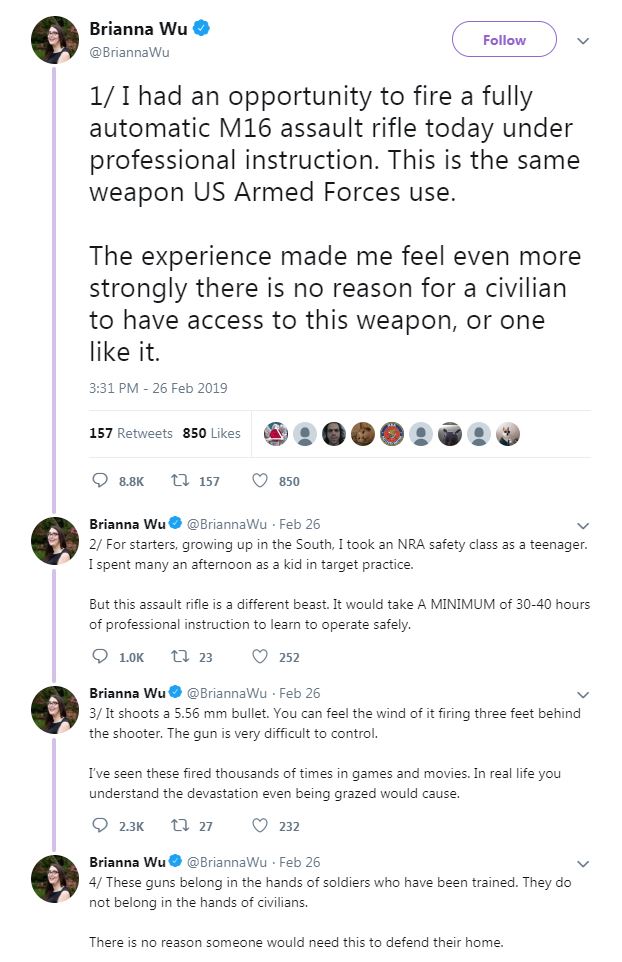 Yeah… that reminds me a lot of the “journalist” from the NY Daily News who got PTSD from firing an AR-15 at a range.

First of all, I find the idea that she shot an M-16 under professional instruction to be highly dubious.  Maybe she did, but I want details.

That said, this whole thread is horse shit.

The “I grew up in the South” part about target practice sounds like a New England Lefty trying to simultaneously gain gun expert credit while trying to pass it off as something unseemly because of anti-Southern prejudice.

“Back when I lived where cousins fuck and people have homes on wheels, I shot a gun because that’s what people do own there.  But now that I live where Harvard is, I am more sophisticated than that.”

I don’t know what that “you can feel the wind” thing is, unless she’s talking about muzzle blast at an indoor range.  In which case, that is “shoulder thing that goes up” level vernacular inaccuracy.

Last time I brought up the issue about guns and Brianna Wu, I got into a fight with a reader over mandatory training.  I don’t want to rehash that fight, but this is why I have a problem with mandatory training requirements.

She believes that it should take a minimum of 30-40 hours of training to shoot an M-16.  I still don’t think she shot an M-16, probably an AR-15 and can’t tell the difference or is lying.

So assume that they know that gun makers will just work around an AWB again.  Their goal is to ban all semi-autos.  That might not survive a SCOTUS challenge.

In Europe and Australia they make no differentiation between assault weapons and other semi autos.  They just outright ban semi-autos or have different permitting requirements for semi-autos that are stricter than for bolt guns.

Knowing that, how burdensome would a law be that says “to own a semi-automatic firearm. a permit is necessary and to obtain that permit requires 40 hours of training.”

What would 40 hours of training cost?  A few thousand dollars?  What working class person would take a week off of work or spend a few hours a night after for three weeks to get the training for the permit?

When called out on the fact the AR-15’s are not full auto, this is how she responded.

Really, converting an AR-15 to full auto is easy?  This person is just bullshitting all over the place.

That has been our downfall.  We think that they are stupid.  They are not, at least not all of them are.  They are ignorant.  That is true.

I don’t think these people are stupid.  They know nothing about guns but they know how to scheme and connive and lie and be duplicitous and manipulate their way into getting what they want.

Wu is using projecting and fear mongering to try and strip us of our rights so that we are more easily abused.

That isn’t stupid, it is evil.

10 thoughts on “Brianna Wu is still running and still ignorant”