CSSGV: Stepping deep into a s***hole they were not expecting.

Somebody deep in CSGV HQ decided it would be a good idea to come against this shirt offered by Ranger Up. 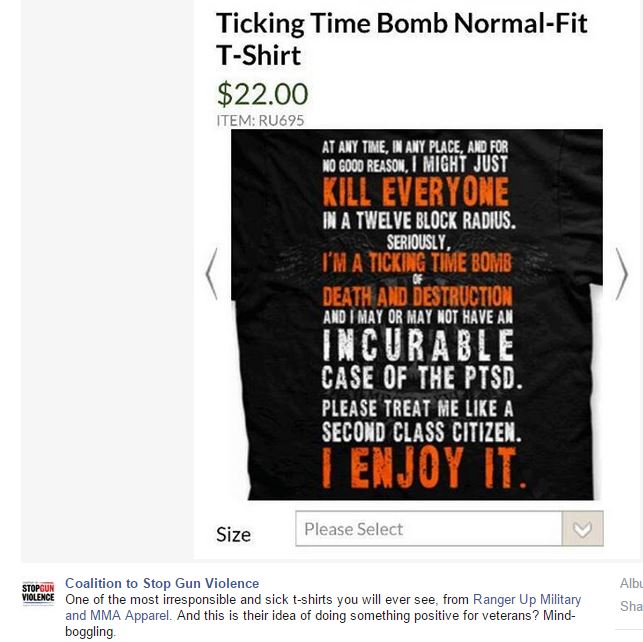 The shirt’s message is humorous and harsh: Yes, some Vets might be suffering from PTSD but that does not give anybody the right to treat them as some sort of dangerous sub-species of human, untrustworthy to be walking about our streets.

As we have know to happen, the Laddittes came out on full force being stupid,

Audrey Ohlson Smith The gun mentality is the biggest threat to our country!!!

Alex McKinlay Ironically, they have just strengthened the case for tougher gun laws. Then again, they’re probably too stupid to realize it.

Judi Green Our gun culture’s mass shootings is slowly desensitizing us from our own humanity. This T-shirt is a manifestation of that madness.

Jeanne Ellsworth Wallace That’s one big sicko!!! After a very recent mass school shooting in Washington state, this is close to my heart, and his shirt is not the least bit funny. I’d warn the police of his intentions!

Carl Thayer How bloody bizarre: it’s like seeing inside the mind of an actual lunatic. How extraordinary.

Karl Rines If they put it on…. take away their guns and lock them up in a mental ward immediately.

Sean Pronay Again, Steven, please see my comments of 11:11 Tuesday. My position is that wearing a message like this (especially while doing something others might find suspicious, like um, I dunno, maybe openly carrying a gun in public) is at best a dumb idea, and at worst indication of a death wish. And if you’re doing it in a state with an SYG law, and maybe your complexion isn’t as pale as mine, there’s at least a slim chance you’ll get fatally shot and your killer will be acquitted.

Elizabeth Cornwell This shirt looks like grounds for arrest and not just for being *!@#$%&* stupid!

What they were not expecting (and had kept the poor media intern busy deleting comments) was the reaction of veterans against being treated, again, as a dangerous animals. And being vets, some of the counter-comments are just “illustrative” and plain genius:

BJ Bromer What Liberals and gun-grabbers don’t get is that us vets have an oath that we took. We will never give up our 2A rights. Got my 11 Bravo degree at the university of Ft. Benning.

Preston Gamblin FREEDOM OF SPEECH! LOOK IT UP, IF YOU DON’T LIKE IT DON’T BUY IT…UNTIL THEN LEAVE THE BROTHERS AND SISTERS OF THE VETERAN COMMUNITY ALONE! Ranger Up, ART15, and Grunt Style, are just a few of the companies Owned, Operated, and employee Veterans that understand Veterans, and assist Veterans! If the Veteran community found this shirt “Offensive” Ranger Up would have pulled it ASAP! Quite your crying about what you think is best for the Veteran community…Try Shuttin your damn mouth for five minutes and listen!!!!!!

Ken White I think I speak for most of the vets on here I say, the next time you have a thought do us all a favor and just let it go.

There are more replies from vets, too many in fact that CSGV is having a tough time catching up and deleting them. But I like this last one as it summarizes the whole affair:

11 thoughts on “CSSGV: Stepping deep into a s***hole they were not expecting.”