If you are in any kind of social media and you are vocal about your support for the Second Amendment, you may have a friend or follower like this: 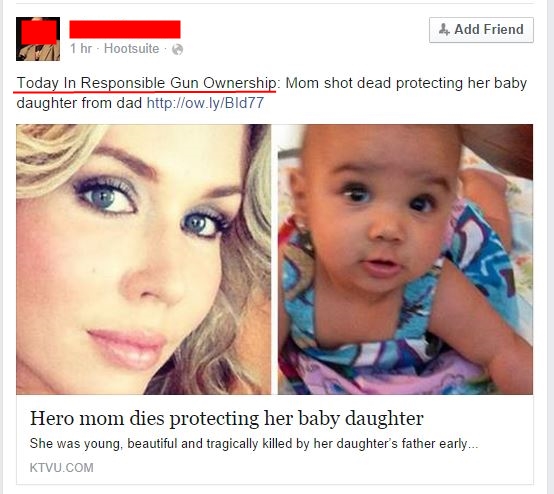 These are people who scour the news to find that heart wrenching item of killing to bring it to you and rub it in. Something gruesome to incite a negative emotional response on everybody’s part except theirs as it seems they get some sort of almost sexual gratification by associating these horrible crimes with people they oppose politically.

They are very selective when it comes to the news pieces they look for.  Children are their number one preferred victim followed closely by women. Whites in nice suburban neighborhoods above minorities in bad urban neighborhoods (they sell better) and exclusively deaths or injuries that are done by firearms and not dying by being beaten to death or set on fire or hacked into pieces. These types of “Non-Gun” deaths do not fit what they want to do nor care about because it is not insane violence and death they care about but their own faux sense of moral superiority regarding guns.

As in the case shown in the picture above: According to the Gun Control Snuff Fans, the father was not responsible for the death of the mother, no siree! You ugly rednecks that cling to your guns are the ones that pulled the trigger! You are responsible for that baby to be now an orphan! Yessssss! (You could almost see them shivering in pleasure.) If there was better Gun Control, this would not have happened! (Check for moisture in their undies now.)

Of course, they fail to see that Gun Control means everybody is unarmed making them victims unable to defend themselves against bigger, more aggressive people….like the father that killed the baby’s mother.  That incongruity gets filtered in the name of cybernetic  loin gratification and  their alleged moral superiority.