Why Half? I only survived day one and it was frustrating as hell yet an amazing learning experience. Allow me to narrate.

Mistakes were made, by me of course. Those mistakes lead to a very tired, in pain and frustrated idiot who made the one rational safe choice and decided he would stop before things got worse. If you are planning on attending, make notes and do not make the same mistakes I did.

Right after the initial briefing on both why Appleseed, range commands and security to be obeyed, we got to shoot out first target to establish our baseline and use it to track our progress at the end of the event.  So it is with great deal of embarrassment I present you my base line target shot at 25 meters. 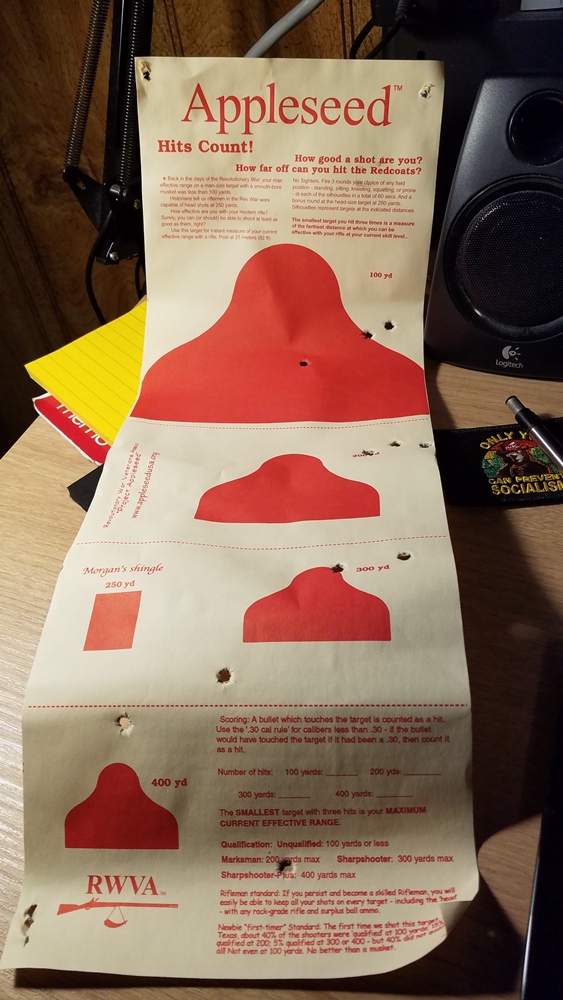 Yup, I sucked that bad with a rifle. After that, we were introduced to everything from sling use (eye opening, at least for me) , the six steps of firing a shot to the prone position. And then we shot with this new acquired knowledge. The results are below. 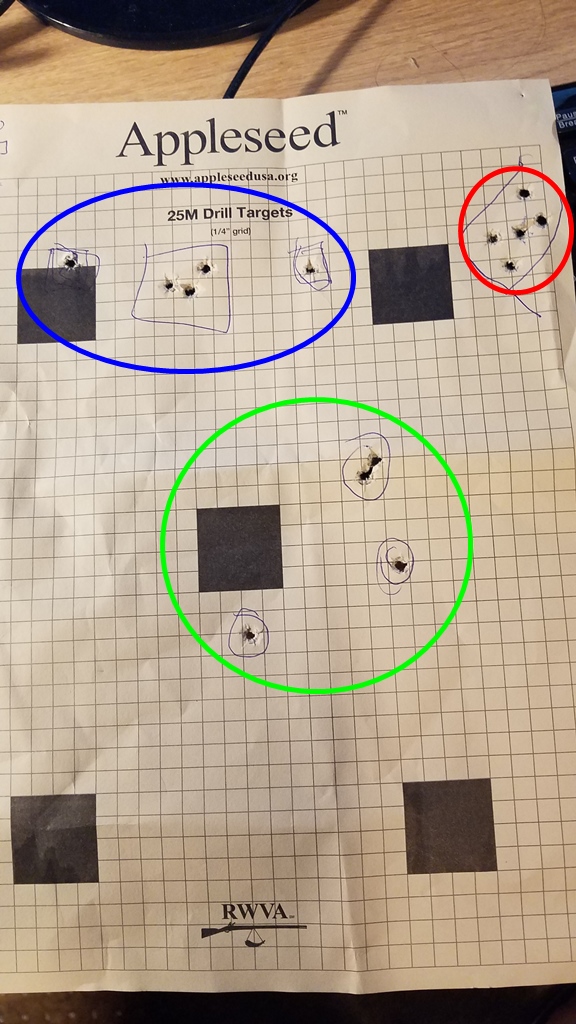 Green was my first group after the initial instruction. I was helped analyze what I was doing wrong and proceeded to shoot a second group circled in blue. After more feedback and corrections, I shot the third group (red circle).

That was me! On prone, with a sling and the proper teaching on an open mind. I was jumping inside my head of sheer joy wondering what marvels of shooting I could have next… and shit happened.

As you can tell by the groupings, Point of Impact was a bit to the right and high of the Point of Aim and right after the third group, we went on to receive a very comprehensive and easy to understand teaching on how to sight your rifle. How good? I finally understand Minute of Angle and the Clicks, damn it!

So, according to my calculations, I needed 10 clicks down and 22 clicks left to zero the rifle and here is where comedy of errors begins. Appleseed asks you to know your equipment and to bring the instruction book if you have it. My scope is Gibson’s and I could not find an iota of information other than were made in Japan under contract sometime in the 80s. But we all know anyways that one click is 1/4 MOA, right? That is what 99.5% of scopes work, right? So I translated the results to the scope and shot a test group… not a hit on paper. WTF?

I think we shot another just to be sure I was no hallucinating and again, no hits recorded on paper. The instructor tells me to go back on the clicks to regain the “normal” and work from there. And what I did was fuck up #2: rather than go back 22 clicks to the right, I did 22 clicks to the left again. The result again was obvious: nothing on paper. The instructor stapled a couple of targets to the side of working target and glassed it while I shot again. This time he discovered that: 1) I had clicked the wrong way and 2) there was a high chance that the clicks on my scope represented 1/2 MOA and not 1/4 MOA by how far of center I was.

By this time, Screw Up #3 makes its appearance in the form of Failure to Eject/Extract. About every 4th shot, the case would not come out or eject partially (even after a bore snake cleaning) and I did not have a spare rifle (Make a note, take 2 effing rifles with you as Appleseed recommends) We managed to get the sights almost right, but the class needed to continue so thy had to remain slightly off. I did not care much by then.

Why I did not care? Because I was in pain. My knees, my elbow and my back were flaring fountains of physical suffering and that started to affect me and my shooting. Yes, I had a mat, yes I had elbow pads, but I am not a spring chicken anymore and that stuff was not enough. In fact my left elbow is swollen as I type this. Mix pain with rifle malfunctions and I was royally pissed at myself and that was not the best attitude to have.

The Appleseed instructors had loaner rifles, but I made the decision to simply stop and avoid making a safety booboo. I was a Safety Officer with IDPA long enough to know how shitty a combination like that could be and decided to take myself out rather than being the asshole who had major safety violation. I stayed a couple of more hours watching and learning (The Three Strikes of The Match was a very compelling narrative) and then I left for home and a night with Motrin

So what did I learn? Holy crap! A lot for not even one full day of the Project. My groups improved like crazy and that on itself is half the battle. The little booklets you are given when you arrive: Project Appleseed Guidebook to Rifle Marksmanship is an amazing resource which I plan on keep using. I would suggest you get one even if you are not planning on going.

The instructors were also keen in telling us that every shot teaches us something even if we miss and they are right.  I had several “missed shots” so here are the things I will change:

Going to get hard shell elbow pads. I used some nice cushioned soft pads, but they simply moved around when I was not paying attention. And yes, I was on a mat, specifically the Appleseed mat which is a nice one, but we were laying on bluestone gravel and you still could feel that crap. I will probably add a piece of camping sleeping pad just for added cushioning in case the next ground is as bad and to save on knee caps because I can’t wear frigging kneepads which you should also get just in case.

I will chug Motrin before the event rather than when I get back home. If it takes the edge of the pain enough to concentrate better, it will be an improvement.

Spare Rifle: I am in the market for another Ruger 10/22. If you are in Middle Tennessee and have one to you want to part with, let me know and see if we can come to an agreeable transaction. I will also be hitting pawnshops to see if there is one somewhere because sure as shit, I can’t find one in the local stores. The rifle I have now will get a full disassembly and deep cleaning to see if the extraction problem ends. But I am scalded enough I will also probably order an  extractor and install it.

Interestingly enough, my two failures were covered in the recommendation by Appleseed How to Prepare | Project Appleseed (appleseedinfo.org) which shows they really know their stuff because they have dealt with idiots like me before.

So although I did not finish and got all the knowledge and training I could get, I don’t feel I wasted my time at all because I learned and improved my accuracy. And as sure as heck I will go back for another event as soon as I get my crap together, I want to see how much I can improve and learn.

PS: Yes, I know I sound sort of “rambly” but I am still processing  and analyzing what I experienced and what/where is next.

17 thoughts on “Half Appleseed AAR: I need more Motrin.”