Today in “If a Republican did something similar, Lefties would be rioting with torches and pitchforks calling for blood.”

Here is a close up of the relevant image from the website that sells the shirt. 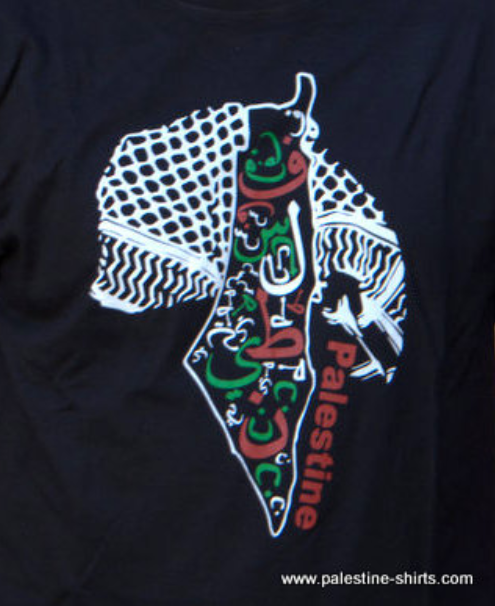 To make it clear, that is Arabic for Palestine in the colors of the Palestinian flag, backed by the keffiyeh, which is a symbol of Palestinian nationalism, covering the entirety of Israel and the Palestinian territories.

The symbolism is not hard to parse.  It is a call to make all of Israel and Palestine a single Palestinian state.

This cannot be accomplished without the mass extermination of Israeli Jews.

Generations of Jews have fought for and died for an independent Jewish state of Israel.  They are not going to give that up without a fight.

Hamas, for all of its evil, is at least honest when they say that killing all the Jews in Israel is what they want to do to create a Palestinian Muslim state.

Palestinian Authority President Mahmoud Abbas has made it clear he wants a Judenrein Palestine.  He says it, from his own mouth, to the press.

Congresswoman Rashida Tlaib clearly supports this.  The Democrats must support this as well because there has been no condemnation of it.

The mask has just about completely fallen off.

The position of The Squad, the defacto popular leaders of the Democrat Party is “kill the seven million Jews who live in Israel, take their land, and give it to the Palestinians.”

Do we need any more evidence that the Left is the enemy of the Jews before they start shoving us into gas chambers?