No idea how the heck we were able to get the Markham Park range for that date but we are planning on getting some IDPA Classifying going on early in the morning for the heathens among us followed by a good Shotgun/Pistol and Rifle/Pistol Monster Hunting Shooting. Available for your eradicating pleasure, the menu consists of Zombies, Ghouls, Werewolves, Chupacabras (A local favorite,) Gnomes and Sparkling Vampires.

The match is “sponsored” in part by M.H.I. Miami which is basically the fans of Larry Correia’s Monster Hunter International and Monster Hunter Vendetta. The Human model for the targets is a club member who recently became another fan of Larry’s He finished MHI just yesterday and was tripping happy) and I was using his mug without permission for the Zombie and Ghoul (also Werewolf) targets, but now he will be attending the match and I don’t have to worry about being shot for not paying copyright.

The IDPA Classifier will start at 8:30 am and the Monster Hunting Match will start immediately after, whereabouts of noonish to 1:00 pm.

Because sometimes flipping the bird to the Nanny State should have a creative aspect. 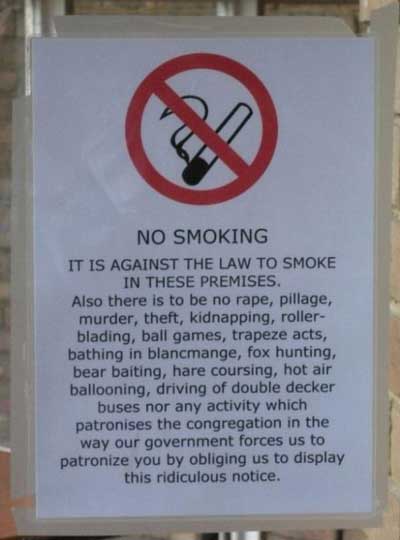 It is the last days of October and it is time to finally express a few words on the overall performance of Slipstream© Weapon Lubricant. Nothing lasts forever an so, after 4 months, some 1,200 rounds of reloads (including home cast bullets), really dirty/muddy/dusty shooting environments not cleaning the gun since the day I lubricated it and carrying it every day under the heat and humidity of South Florida, I am “sad” to report that the first malfunction finally appeared last Saturday: The FNP-9 refused to go into slide-lock during an IDPA match.

As malfunctions go, this one is not the end of the world and obviously it cannot be attributed to Slipstream but to the four month’s buildup of burnt propellant gunk, dust & dirt and zero cleaning till now. I gave the gun a generous spray of Shooter’s Choice Polymer Safe cleaner and the slide lock quickly reappeared.

Going back to the IDPA match, there was not another type of malfunction at all (With the gun. The shooter was nothing but a huge mental malfunction turning a really crappy shooting session.) I never felt the gun strained or heard that annoying squeaky sound like a cheap hotel bed you get when modern handguns do not have the proper amount of lubrication.  So, to keep it short, Slipstream works as advertised for me.

Now if you excuse me, I have a date with a cleaning kit and a long overdue TLC for my FNP-9. And yes, another dose of Slipstream will be issued.

A good reason for buying a gun.

Sometimes you actually could end up hating Oleg Volk. Not only the sucker is a darn gifted photographer, but he manages to get some darn cute models. Joseph Chetwood and Crusader Weaponry are saying right now: “Well, our rifles never look that good.”

And I just got this in am email.

Poor kid got a nice shiner with the recoiling gun. At his age, I would have recommended a .22 LR and a class on getting a proper grip.

Frankly I think the adult got what he deserved.

If Photobucket ditches the video, let me know in the comments. 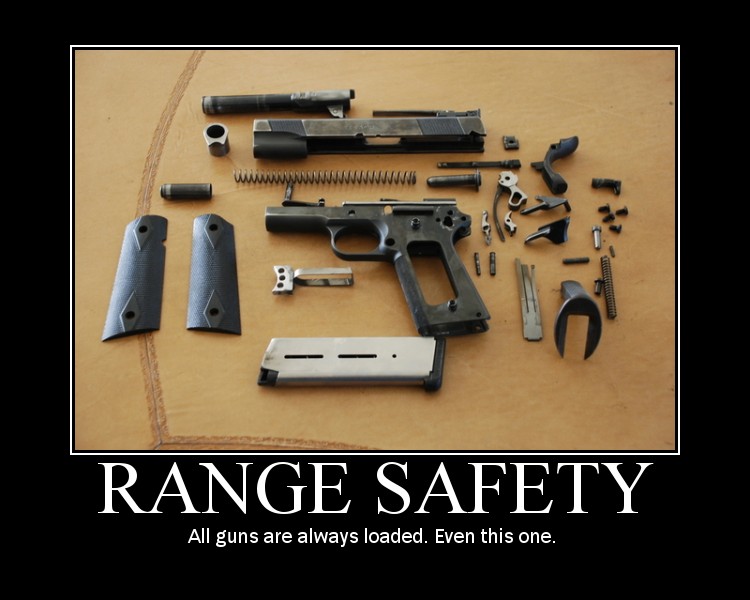 Sometimes a theme or a meme appears within the gun blog community akin to dandelions: they pop-up out of nowhere, they look cute and interesting but they are a nuisance to get rid of and end up screwing the garden.  The latest and freshest appears to be the re-interpretation of the Four Rules of Gun Safety as the Four Suggestions.

Yes, I know <wink, wink> that the gun I just checked and is still in my hand is not loaded. And since it is not loaded <wink, wink> , I can put my finger on the trigger ’cause it is not gonna fire and if it is not going to fire, I really should not mind if the gun is aiming at something I am not willing to destroy <wink, wink> and obviously I do not need to be aware of what is past the not-intended target. Then again, I am human, prone to mistakes, brain farts and absolutely guilty of committing the dumbest mistakes on the face of this planet which means, if I am to suddenly develop a disdain for the Four Rules,  something might end up with a perforation that neither God, not the builder/creator/manufacturer intended to have.

And yes, there are times where we will be violating a rule or two. But in the inside of our brain, the Four Rules’ Alarm should be going at full volume and our cheeks should acquire a reddish hue of embarrassment. This is a good thing because it means we are conscious of the potential danger we have subjected somebody and ingrains in us a deeper sense of responsibility for our gun and our actions. When we shoot (if you are doing it right) you are running almost in automatic with our senses deeply engaged to the action and the target. Having the Four Rules so deeply engraved in our minds that the sub-conscious takes over and tries to make sure we don’t send a projectile where we do not want it, may it be a costly object or an even more costlier body part is not a suggestion but a dogma we should follow instinctively .

At the beginning of this year, I was around when a shooter had a negligent discharge in our club. He was  shocked and disoriented and with good reason: he “knew” his gun was unloaded and yet it went bang in an enclosed area that left him half dead and totally shocked. And when two safety officers approached him to ascertain his status, he went on to violate the rest of the Four Suggestions. Do you know how fast and tight your sphincter closes and how chilled you body goes when you see a .45 caliber handgun aiming at your abdomen and you can see the trigger with a finger a top of it? By the grace of God, nothing else happened and we waved good bye forever to that shooter who not only pissed on the Four Rules but also did some micturition on top of the Club Rules and the Range Rules by screwing around with what turned out to be a wink-wink-unloaded-but-“Oh crap!”-actually-loaded gun in the Safe Area.

The Four Rules are a psychological Safety device. To demean them and take them as a suggestion would be like disabling the safeties of your 1911 or carry a Single Action Colt with six cartridges or having a shell in the chamber of the Remington 500 bouncing in the trunk of your car.  Something eventually will go bang when you don’t want it.

Contempt for the dogma of the Four Rules breeds negligent discharges. And thinking that “It will never happen to me” is the surest way we will know about the new ballistic-induced tattoo you acquired either in the evening news or a gun forum.

PS: Whenever at our club we see a New Shooter (and New Shooter means anybody who has not shot with us before and it does not matter what kind of experience he or she has) demonstrating an inkling of boredom when we recite the Four Rules, we give them our Three Rules:

Rule One: Don’t Shoot Me.

Rule Two: Don’t Shoot Anybody Else.

Please make sure you observe religiously Rules One and Two; observing Rule Three is up to you. However if you violate Rules One and/or Two, you can rest assured that we will repay the favor.

This usually gets the offender’s attention. 🙂

So a Dick’s Sporting Goods stores opened up recently somewhat near where I live. I had never been to one and I found out they sell guns, so I finally and over the very loud protests of She Who Must be Obeyed manage to squeeze some free time and visit the store. On arrival, I made a bee line to the gun counter to see what are their offerings and prices. I quickly see that no handguns of any kind are for sale but they have a somewhat decent selection of sporting long guns and not so bad prices. Nobody is in the gun section so i take my time to see what other things they sell and they also have ammunition for handguns (OK, no handguns but I can sell you the ammo for them), knives, scopes, etc. Finally a pimpled, bespectacled young whippersnapper drags himself behind the counter and droningly asks me if he can help me.

Me: Just looking but, let me ask you a question. How come you guys don’t sell handguns?

Kid: It is against the Laws of the State of Florida.

(I admit that this was not a very polite way to indicate I was not ingesting the excuse, but my BS meter got pegged real hard.)

Kid (recoiling at the outburst): Well, you know, it is different more complicated paperwork….

Me: It is the same paperwork for both handguns and long guns. You guys must have an FFL, right?

Me: you know, the Federal form it must be filled when you sell a gun over the counter?

Me: Thank you, have a nice day.

Nope, not coming back to Dick’s. At least one employee honors the name of the store with his knowledge and attitude.