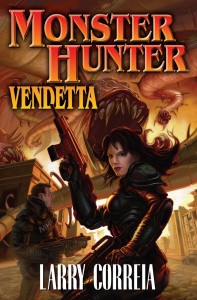 Here it is folks! Monster Hunter Vendetta. OK, it is not here here, but you can actually pre-order via Amazon.com. The continuing Saga of Owen Zastava Pitt and the crew of Monster Hunter International with Owen being hunted by the The Dread Overlord (the unspeakable name) and has to be placed under protective custody by the Feds and his babysitter is no other than his nemesis Special Agent Franks. And that is about what I can guess from the Amazon preview and and the snippets that Larry’s been leaving in Facebook.
Go ahead and pre-order the book. You know it is going to be a good one. And if you haven’t read Monster Hunter International, read the first seven chapters for free and then mosey over Amazon.com or Barnes and Noble to get your own hard copy.

This is what a Gun Free Country looks like.

Yesterday was the anniversary of Hugo Chavez’s revolution. Hugo has been a busy boy. He has shut down TV & Radio stations that dare to present opposing views. He sic’ed his legal (and sometimes illegal) attack dogs on journalist that dare investigate him or his minions for the plethora of crimes that they commit every day. It is the Chavez that has dismantled Police Departments deemed politically unsafe but in doing so, criminals have had a field day murdering their merry way into riches. And of course, to “reduce the increasing crime,” Chavez has disarmed the population in order to “keep them safe.”

The result has been a total debacle in security for the average Venezuelan. He cannot find news other than those approved by the Red Government, He is unsafe both at home and in the streets and he cannot speak his mind and address grievances for fear of being attacked. And being disarmed does not help one single solitary thing. 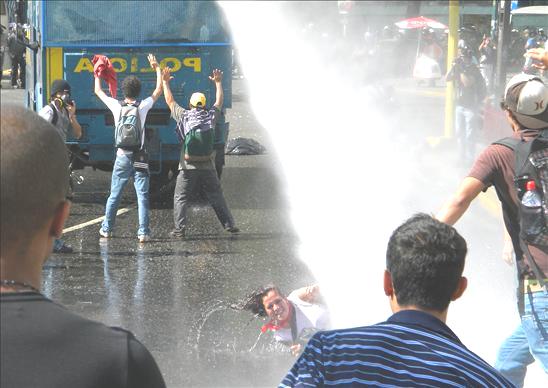 Subjects get an answer from Chavez.

And while TV stations were present at the time of the happenings above, these images were not transmitted live.Why? Because thanks to Venezuela’s equivalent of The Fairness Doctrine Law, all broadcast media is mandated by law to transmit immediately and concurrently, any government message or event as they demand it. The second all stations were focused on Chavez, the police attacked demonstrators sitting peacefully at a local square. Twitter messages and uploaded pictures to photo hosting accounts or video to Youtube filled the blackout vacuum.  Still the result was the same: Chavez and the Repressive Police won, Subjects lost. And he has announced that Twitter, Facebook and the Internet in general are contra revolutionary tools and as such they need to be addressed.

Jump across the Caribbean and one day in a Tea Party that happened somewhere in the US, a man addressed grievances as per the First Amendment. 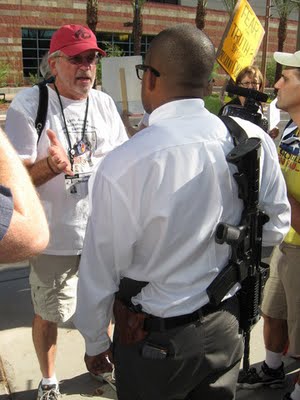 With a small reminder of the Second Amendment.

We keep telling you, it ain’t about duck hunting and politicians know it. That is why they are so scared of the 2A.

Too late to apologize.

This is actually an old picture and some items have changed. FNP-9 with 2 spare mags, Boker Subcom, Cold Steel Night Force, cell phone, bluetooth, wallet, memory stick, Swiss Army knife with house keys, truck keys and a bandana (not pictured). Everything packed in a EOTAC lightweight vest that my wife fondly calls my tactical purse.

Things that make me bang my head against a wall.

So yesterday I am hanging outside the office waiting to be time to get home when a local PD vehicle arrives and a young officer gets out. He is requesting directions inside our facility because he’s been assigned to an event related to the “Big Game” (It seems that you cannot address the Super Bowl unless you have permission by the NFL.) The morning supervisor comes out, hears the request and proceeds to give a set of directions that will either take the officer to his post with the help of a GPS and a Sherpa or more likely send him to commute with the gators in the Everglades. While I am looking at the exchange, I notice that the officer’s sidearm hangs kind of low and loose on his leg. I thought “Damn, what kind of thigh holster is he wearing. It doesn’t look too stable.” So I approach discretely and my jaw takes a free fall to the asphalt. The officer has his Glock in a basic Fobus paddle holster that is hanging from his pants pocket.

I wanted to say something, (Like yell at the top of my lungs WEAPON RETENTION MUCH YOU MORON?) but being that my mood was somewhat grouchy, I knew that I would say something the Officer may take the wrong way and I did not want to go take a nap at the local jail. He left, I left 5 minutes later and I haven’t heard anything on the news about an Officer losing his weapon…..yet.

On Babes, Bobbies and Pink Guns.

My favorite Pod-Mistress Gail Pepin has a bone to pick with some firearms manufacturers. It seems that she finds demeaning the use of big boobs and slim female bodies wearing saran wrap-type clothing to sell guns to the male population and also hates the idea that pink guns will sell automatically to women because of some hidden genetic code that forces them to buy anything in that color according to manufacturers. Gail also picks a serious femur with us because we actually take a spell to admire such marketing ploys. Supposedly, we should be ashamed of ourselves.

Gail, sorry but this cro-magnon is not apologizing. Although I understand there is a fair amount of the “fair” sex that finds these type of things offensive, another fair amount do not care and sex is a valid selling tool. However do give us neanderthals the benefit of  doubt. The babe displaying the gun can be the Playmate of the Century and have the body that God and a very good plastic surgeon gave her, but if the gun she is pushing is crap, I ain’t buying and that goes for the majority of fellow male Gun Owners.

I don’t care if the Whizbang 3000 Tactical AKlon comes with a free Hooker-a-Month and a free weekly case of Jack Daniels, if it does not go bang every time I pull the trigger and lands the bullets where I want it to go, I will not buy it and neither will any other gun owner with an IQ above 75. Specially nowadays with the Interweb and gun forums offering almost instant and brutal reviews on any gun that hits the market. 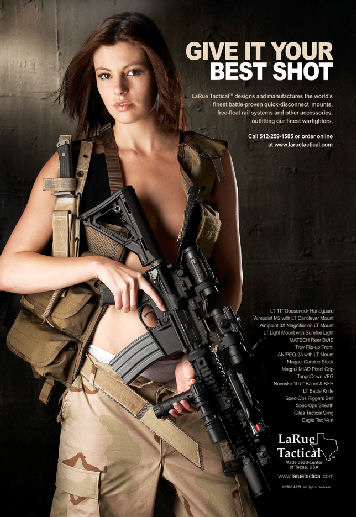 I don’t think there is a male in the Modern Gun Culture that has not seen the above poster. And allegedly there is one even racier floating around the net (If you have it, please send me the link or mail me the pic to miguel(AT)gunfreezone.net, many thanks in advance) but as good looking as she is, the only reason LaRue sells oodles is because they deliver a great quality product and they stand by it. As good looking as poster babe could be, I am not defining my self defense on libido but weapon quality and functionality. If SHTF, who in his right mind will pick her over a rifle? (Yes guys, there is a rifle in that poster. Look harder.)

As for pink guns, why not? There are actually many women and some men that like pink. If the lady likes purple…sorry…fuchsia, well go ahead and get a gun in that color. It is your money and your taste and as long as it goes bang and hits the target, who cares? I love to see my wife wearing a pink blouse or sweater ’cause I think she just looks beautiful in it. She is not a fan pink so I don’t buy much clothing in that color because I hate to impose. Would I buy her a pink AR? Nope, but I have the suspicion that a gun in Bengal tiger colors would drive her insane. You don’t like pink? Don’t buy it and demand that the manufacturer come with a gun in your favorite color. To each his or her own. 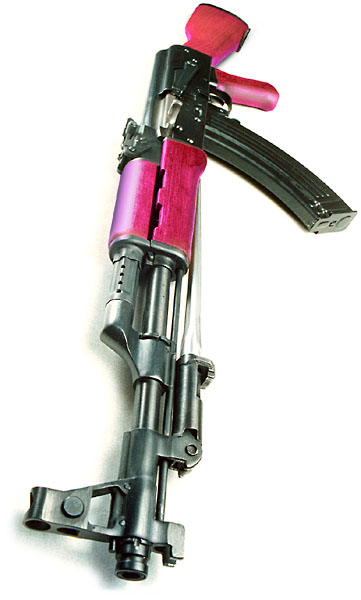 And of course, there are those of us that think a Pink AK should be banned just on bad taste. 🙂

PS: I refer to Gail as Pod Mistress. I know it evokes the idea of whips and other devices of control and that is why I use it. Gail has to record a podcast with the likes of Massad Ayoob, John & Terri Strayer, Steve Denney, Herman Gunter, Chris Christian and Mike Larney in a free-for-all format. The only way that the show does not run away from her is to keep that herd in absolute control. I heard rumors that besides the standard recording equipment, a bayonet, a whip, a taser and several cans of pepper spray are always at Gail’s reach.
If you haven’t check them out, you are missing on a great show. Search iTunes & subscribe for ProArms Podcast and enjoy!

PS2: Gail, when you read this and start plotting revenge and ways to flay me with you bayonet attached to your Glock I have bad news. I won’t be going to the Florida IDPA State Match this year. 😛  So unless you make a trip all the way down here to Miami, you will have to wait till 2011. <evil laugh>

Holy crap! Somebody wants some seriously pimped out shotguns in D.C. Afraid of the next Tea Party march?