You see there was a group of people who engaged in attention seeking behavior during the January 15th rally and legislative meet that has quite honestly created a serious rift. Not only has it created a rift but there is a bit more of a history involved than just, “the crazies showed up.”

via In which crazy comes out… (Get off my side) – The Minuteman.

Barron’s use of the word crazy is not quite derogatory or inflammatory as you may think:

They started becoming more disruptive during Paige Biron’s speech. I just ignored it, that is until we heard the familiar sound of charging handles and bolts. I was mortified when I looked back to see loaded magazines being pulled and inserted and charging handles struck. This happened about midway through Joe Huffman’s speech. Who they kept trying to talk over as well. Joe did a fantastic job refusing to engage the misbehaving and distracting children in the back.

And he summarizes it best:

Honestly I feel a bit betrayed by my own. Get the hell off my side.

This has gone well past good intentions used as paving material on the expressway to Hades. This is sheer infantile stupidity.

No, I don’t believe these people are false flag operation from Bloomberg or they are getting paid by Microsoft: they are too stupid for either, so basically they are being assholes for free. They took a legitimate and much-needed Pro Second Amendment effort and transformed it into armed Halloween scripted by Moms Demand. In fact, Gun Control groups are getting more traction out these escapades than out of Sandy Hook itself.

The only thing they need to add to hit every negative stereotype for their next “demonstration” is a black mannequin with a noose around its neck being dragged behind a pick up truck.

Update: “Gun Control groups are getting more traction out these escapades than out of Sandy Hook itself.” I hate being right, just posted by CSGV: 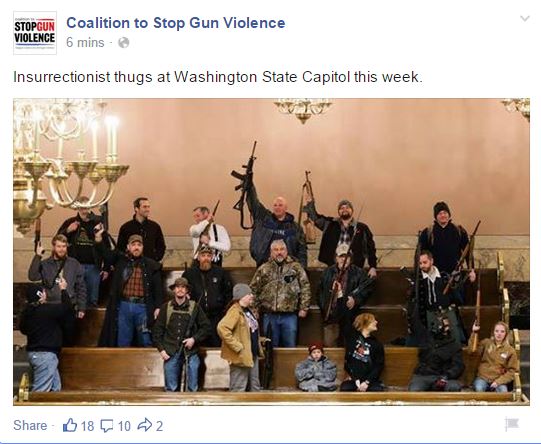