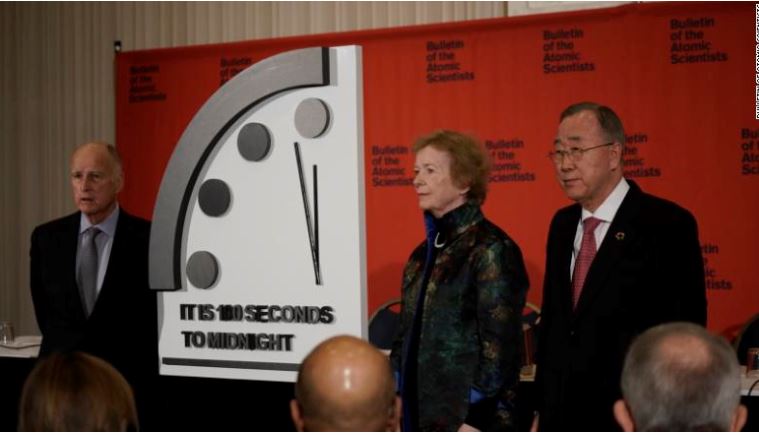 The Bulletin of the Atomic Scientists moved its symbolic Doomsday Clock closer to midnight, indicating that the likeliness of a human-caused apocalypse has increased since last year.
The Bulletin adjusted the clock to reflect human-caused threats such as nuclear weapons and accelerated global warming.
The clock is now set at 100 seconds to midnight. It’s the first time the clock has been set within the two minute mark.

“We have normalized a very dangerous world in terms of the risks of nuclear warfare and climate change,” Robert Rosner, chair of the Bulletin’s Science and Security Board, said in a public briefing.

Being a child of the Atomic Age and the Cold War, I grew up with the winds constant fear of a nuclear end of the world. I eventually learned that the Doomsday Clock was more political than scientific: If the US did something that may have upset the Soviet Union, then the BSA would start screaming about the End of the World, but iof the Soviets did something truly stupid, they would go on mental vacation.

But  in some cases, the threat of shit going south was very real which strikes me as unreal that Robert Rosner, somebody who was pretty much alive and 15 years old at the time of the Cuban Missile Crisis erupted. We are talking about  planes fully loaded with nuclear bombs in the air,  missile silos and trains,  manned with crews about to open their target packages and take out cities all over the world. For almost 2 weeks, we were half a hair’s breadth away from glowing in the dark for a couple of millennia with roaches and scorpions being the top animals on Earth, and the morons at the Bulletin of the Atomic Scientists think farting cows, and plastic straws are actually a bigger threat and we are about to die in 100 seconds .

Who wants to bet?

4 thoughts on “The Doomsday Clock”