“The One Question I Want All Gun Nuts to Answer”: I’ll be your huckleberry.

Just saw this article posted in Facebook. Let’s check it out: 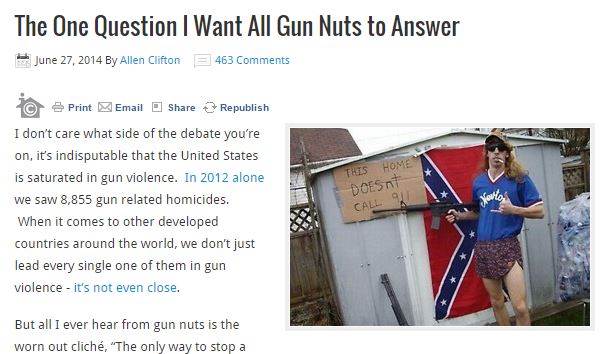 Lovely accompanying photo. You know he is already toeing The Narrative.

I don’t care what side of the debate you’re on, it’s indisputable that the United States is saturated in gun violence.

When it comes to other developed countries around the world, we don’t just lead every single one of them in gun violence – it’s not even close.

You mean White Anglo-Saxon-Nordic countries and Japan where the Klan is seen as the equivalent of the NAACP San Francisco office? Well, that is very racist…wait it the picture above of you?

But all I ever hear from gun nuts is the worn out cliché, “The only way to stop a bad guy with a gun is a good guy with a gun.”  Or the one that really doesn’t make any sense, “More guns make us safer.”

See the numbers above? It works. You just refuse to see it.

Think about this logic for a moment.  For decades our gun laws were so lax (and still are) that we allowed millions of guns to pour into our streets, right into the hands of criminals.

No guns were “poured” on our streets, they were sold. Who the fuck just drops guns in the middle of a road? And if that is a direct accusation that gun manufacturers were giving guns away or cheap to the criminal element, I wouldn’t mind seeing the evidence if you have it.

Now the argument from guns rights activists is that we need more guns to protect us from the guns they helped allow flood into our society, finding their way into the hands of criminals.

That is ONE of the arguments. There are others like having fun, collecting and it is because it is my gorramed right.

The flaws in this “logic” couldn’t be more obvious.  Keep pushing for less regulations on guns, causing more and more guns to flood into our society, which undoubtedly results in criminals having easier access to obtaining guns.

And, of course, what’s the answer to deal with the threat of criminals who’ve gotten these guns?  More guns.

Actually that would be the proper placement of what comes out of the gun in assorted places inside the body of the criminal.

Right now there’s roughly 300 million guns in the United States.  Considering our population is only around 314 million, that’s nearly one gun for every man, woman and child in this country

You are short by at least 50 million. So we have at least one for everybody.

So, my question to gun nuts is simple, “How many guns is enough to keep us safe?”

That would depend on the situation. At a minimum one should have 3 pistols in various sizes with at least 5 spare magazines or 7 speedloaders if you are into revolvers. Rifles a minimum of 2: One with rapid fire capabilities and one bolt-action for delicate far-away work. Shotguns? My preference is a pump and would love an over under cut down for Tiger-Jumping events.

And a crapload of ammo for all.

To answer that question one must ignore the simple math that tells us that the more guns we allow to flow into our neighborhoods, the more gun violence we see.

If you could do math and some basic Google research you would have found the numbers I already shown and saved yourself from writing such an embarrassing article.

But these gun nuts constantly claim we need “more guns” to make us safe.  Well, what’s the magic number then?  Because we’re damn near at a 1:1 ratio for American citizens and guns, and that sure as hell doesn’t seem to be decreasing gun violence.400 million?  500 million?  A billion?

Using my preferences of 7 firearms per person, yeah, a billion sounds about right.

How many guns will it take to decrease gun violence in the United States?

According to NICS checks, it took about 200 million.

Wait, I know what some of these gun nuts think.  They’re preparing for an overthrow of the government.

Here’s a rule I propose: If you’re someone who honestly believes that you can stage an armed rebellion to overthrow the United States government, you’re too mentally unstable to own guns.

Then it is  a great thing we don’t let you be dictator and impose rules on us poor rednecks, right? Bill of Rights and all those pesky documents.

Well, any fool that thinks a bunch of people wearing Walmart-bought camouflage pants and owning a few rifles are going to wage war against the most powerful military that’s ever existed in all of humankind, is insane.

Those who ignore history…

But ignoring these lunatics who think we own guns to overthrow our government, how many guns will it take before we see a decrease in gun violence?

You are repeating yourself. Running out of arguments?

But seeing that we have around 300 million already here in the United States, and gun violence tends to increase as the number of guns in the country goes up, it’s just a question I’d like these people to answer.

We already answered. The question is: Are you ready to shed your pre-conceptions and admit the clear evidence that you are wrong?

Should we go back to the days of the wild west when everyone had a gun holstered to their hip?  Are you trying to tell me gun violence was low back then?

Really? If you read back in history, one of the first things many law enforcement officials did to clean up some of these towns (because of out of control gun violence) was ban the carrying of firearms within town limits.

I know you watched the Movie “Wyatt Earp” (Not Tombstone, that was too butch for him) and may I remind you that both in the movie and in real life, the bad guys ignored the ban just like they do today and shootings and death continued?

Now, if you are a fan of the Wild West history, you may want to read what happened in Coffeyville, Kansas on October 5, 1892 with the Dalton Gang and armed citizens.

But now these people want a return to something that even in the 1800′s they knew was a problem?

Much less of a problem than say, Chicago in the 21st Century?

It makes absolutely no sense. Though it brings me back to my question, with around 300 million guns in this country (probably more), and gun violence that continues to lead every developed nation on Earth…How many guns will it take before “good guys with guns stop bad guys with guns?” Because what reality actually tells us is that more guns actually lead to more violence – not less.

Your imagination does not reality make. Wake up, get some coffee (or Kombucha) and face the facts: More Guns equals Less Crime.

16 thoughts on ““The One Question I Want All Gun Nuts to Answer”: I’ll be your huckleberry.”