Update on the Moving thing.

I am bone and brain tired. If you think moving to an empty house is hard, try move to a house that is already occupied by your elderly Mother In Law and need some TLC and arranging things around.

I unloaded the moving container in the garage and we are waiting for a rented 20 foot shipping container so we can store some of our stuff without having to climb all over boxes in the garage. This is where a detailed cataloging is paying off: we know what boxes (or what items in them) to leave out of the container, what goes all the way to the bottom and what can stay close to the doors for future use.

Let me give you some advice: If you are going to move, use moving boxes and do not go collecting refuse from the back of stores. We got mostly boxes from Home Depot and it was a breeze to pack the container and they fit so tight, pretty much nothing shifted during the trip and only a few items were strapped or secured with line.  The items that broke my balls were boxes I reclaimed from other sources because of size and strength, but I could not fit squat around them.

Shooting? Some done, about 10-15 rounds with a suppressed .22 LR lever action belonging to Oleg Volk who is possibly the sweetest human being with a camera and a literal boatload of guns. And the answer is yes, I met him thanks to the good graces of my gun mentor Carl Weeks who was responsible for introducing me to the Gun Culture back in the 80s when I was an International Student in Nashville. As for Oleg, you cannot help but like him and envy his art a little bit: who among us do not wish we had a bit of his talented eye for photography?

And I met the famous Small Person who was accompanied by Michael Williamson, AKA Mr. Sharp Pointy Things himself. That Artillery Luger I posted last week? Mad Mike’s as well as a bunch of Japanese swords and strange and exotic guns.  And  I will  leave  you  guessing  as if  Mike’s online persona is the same as in real life. 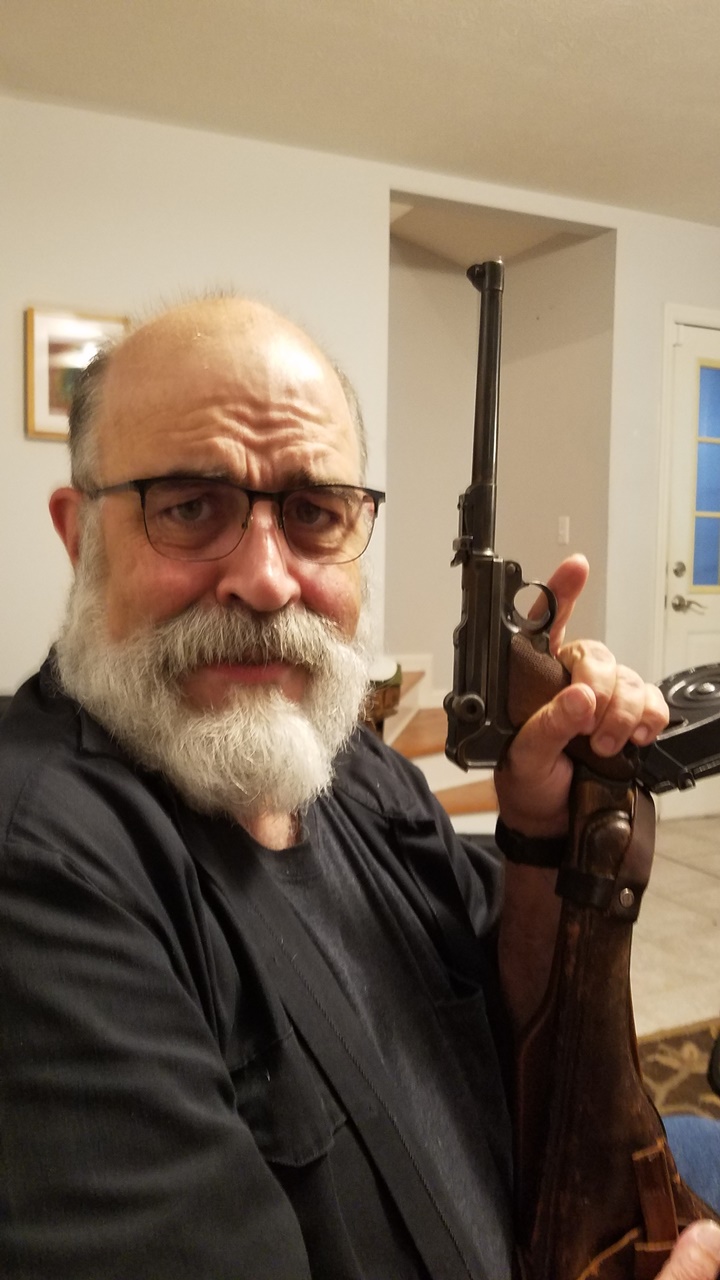 But probably the best part was the conversation. The level of knowledge being traded was amazing and I just sat there trying to absorb as much as possible and trying to keep my mouth shut and avoid spouting stupid stuff. I probably failed more than once on that last one.

I am going to try and see if I can do some shooting on my own this weekend. I have been told by relatives there is a property I can use to send some lead downrange  and I desperately need to remove the rust from my pistolcraft. I also located a nearby IDPA club which I plan to visit and shoot at their match next month. I will do a write up about it.

And one last thing:  Even though I lived in Miami-Dade County, I spent a lot of time in Broward which can be considered enemy territory for gun rights and Conservatives. And yesterday I realized that I am so much more at ease carrying here than I ever was back in South Florida which in great part comes from not giving a damn if I accidentally expose my gun because OC is legal and pretty much nobody cares. I still have not seen a GFZ sign other than in government buildings which are mandated by the law and I do not plan to visit much anyway: Driver’s license and other vehicular paperwork is already taken care and about the only thing left is the carry permit.

OK, that is all for now.

6 thoughts on “Update on the Moving thing.”