Last night, I regaled you with the tale of Jorge Ramos, (Official Trump Hater for Hispanic News) and his team, being temporarily detained by Venezuelan security forces and the equipment confiscated. Today another Hispanic Journalist from Telemundo was taken on a non-scheduled and involuntary tour by the same security forces of legitimately and democratically elected President Maduro. 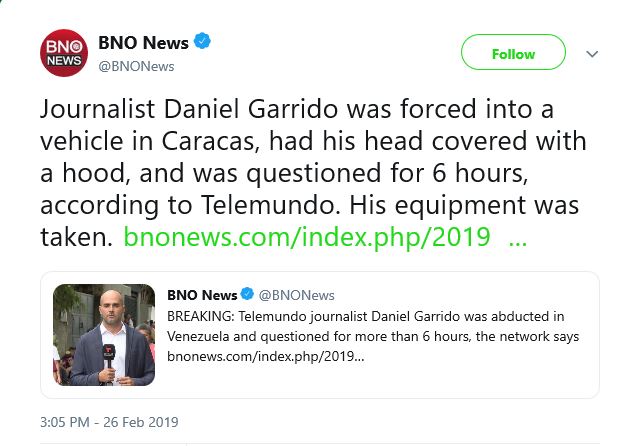 But remember, the only real threat to journalists is Trump calling them Fake News.

Democrats (at least a portion of the Party) is betting heavily on Socialism and the flavor of the Year for the 2020 elections. The party base has gone fully Antifa /Ultra Left and God forbid any of their candidates even say anything bad about the Chavez miracle in Venezuela.  Bernie Sanders found out the hard way about this:

The people of Venezuela are enduring a serious humanitarian crisis. The Maduro government must put the needs of its people first, allow humanitarian aid into the country, and refrain from violence against protesters.

Click the links and just read the comments from his own fans. They rake him over Kentucky coal and Detroit debris for this heresy.

I said it last year, Venezuela’s best use is not oil but as an example of what Socialism does to people. It should be kept untouched till at least after the re-election of President Trump. And we would not want to interfere with a democratically elected starvation and violation of Human Rights, do we? Besides, there is always the United Nations, they can help. It is in their mandate.