Jews, get out of the Big Apple area while you still can

Two days ago I said it was time for Jews to get out of New York City.

Then more news broke, and I am going to have to reiterate this point.

An Israeli student riding a subway train in Manhattan said she was verbally and physically attacked by a woman who hurled anti-Semitic comments at her and another Jewish passenger — and yelled “Allahu akbar!”

In a video posted after the attack, Lihi Aharon said she boarded the train at Wall Street after her college’s induction ceremony last week and asked the woman if she could remove her bags from the seat next to her.

haron said she then sat down across from Ali next to a Jewish man wearing a yarmulke.

“As soon as I sat, that woman started cursing and yelling at him about him being a Jew and ‘Allahu akbar’ and how Allah will end us all,” she recounted in the five-minute video, in which a scratch is seen on her face.

Here is that video:

Second, from Jersey City (where shit seems to be getting worse by the day), as reported by Fox News:

A Jersey City Board of Education member is facing calls to resign by Gov. Phil Murphy and the city’s mayor after writing a Facebook post describing Jews as “brutes” in the wake of last week’s mass shooting at a kosher supermarket.

Joan Terrell Paige’s post, which also questions whether shooters David Anderson and Francine Graham had a point to make in targeting Jews, came in response to another person’s comment about the Dec. 10 fatal attack at the JC Kosher Supermarket that left a police officer and three civilians dead. It appears to have been removed from Facebook, but was preserved in screenshots.

This is the screenshot: 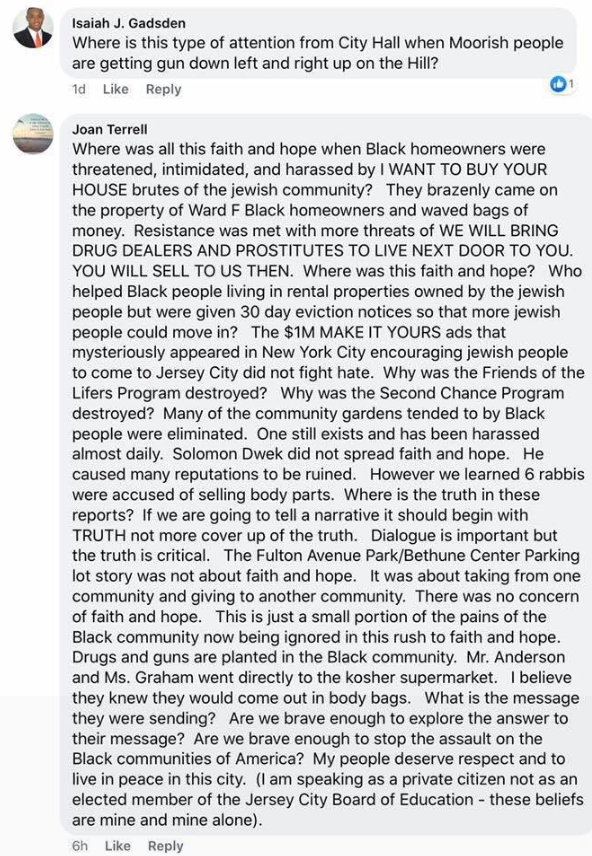 Note the same theme in this Facebook post that I wrote about this shooting a week ago, that the Jews deserved to be killed because the black community is the real victim.

This woman’s opinion is being supported by the Democratic Black Caucus. 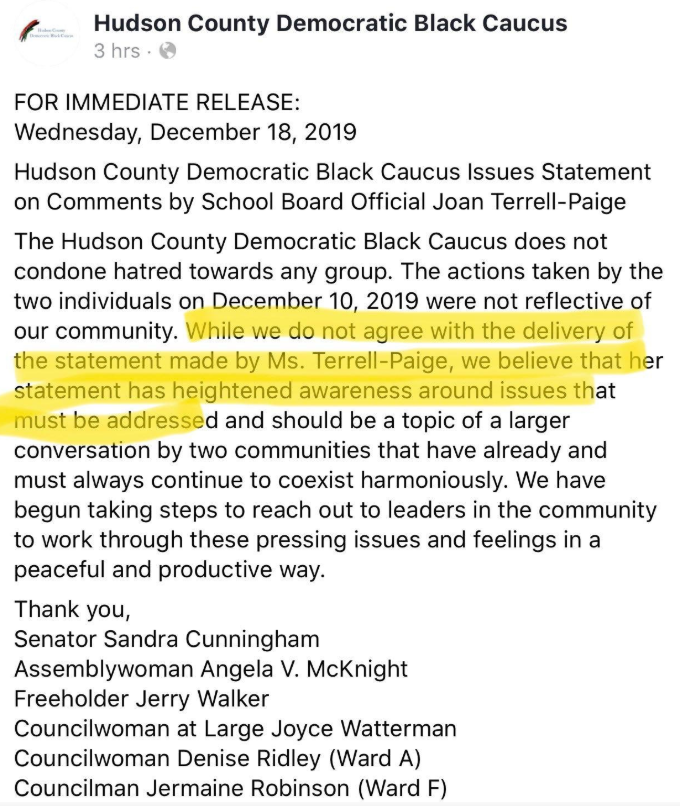 This is an endemic problem.

It is crystal clear here that no matter how many Jews are attacked, beaten, and killed, we are not part of the Progressive victim hierarchy, and Progressives will only care about the murder of Jews if they can blame it on the Right.

They can make this woman step down but the attitude still exists.

Trotsky’s Law is in full effect in the NY/NY Progressive bubble.

This is bad, and it’s only going to get worse, and the Jews of that region need to get out before every attack turns deadly and the murder of Jews becomes a daily occurrence.

2 thoughts on “Jews, get out of the Big Apple area while you still can”